James Fisher, Saint Joseph’s sophomore, will be heading to the polls for the first time on Nov. 6. “Hopefully the things I want done will happen,” he says. Whether you’ve already registered or are starting to get annoyed with all the talk, it’s undeniable that voting matters.

Midterm elections are so important because they generally produce a lower voter turnout than presidential elections. This means your voice matters even more, and you really do have the power to create a change. 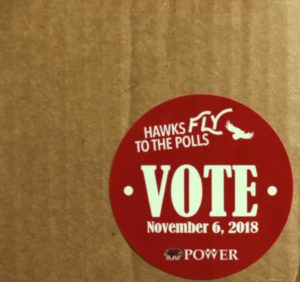 College students could be a powerful voice in the election. Young adults (ages 18-29) make up 21 percent of the eligible voter population. However, young people are the least likely to vote. In 2016, only 19 percent of people aged 18-29 cast their ballot in the presidential election. 45-64 year-olds voted the most, with a 49 percent voter turnout. This imbalance creates a huge impact on the country. While most young people voted for Hillary Clinton in the 2016 election, the low voter turnout was not enough to counter the older voters.

These days, it’s easier than ever to be an educated voter. A quick google search will tell you everything to know about every candidate on your ballot.

Even if you feel like voting won’t affect your life now, you never know how you will feel years down the road. By taking a little bit of time out of your day to vote, at least you’ll know you did the best you could to make your mark on the country.