Finals season is rapidly approaching, and if there is one thing that a college student trying to survive finals needs… its energy!  We sought out to find out what students most commonly consume to keep them going through finals.  There are a variety of options on-campus to grab a quick snack and caffeinated beverage!  At this time of year, the Saint Joseph’s University campus Starbucks and Saxby’s are flooded with students looking for that extra boost of energy.  Before the finals season fatigue sets-in, we’re here to reveal the most commonly ordered beverages that keep students energized throughout these long days.  Most students know their routine spot, but here’s some inspiration for new spots to check out!

We stopped by the campus Starbucks and Saxby’s to get some perspective from the professionals themselves: the baristas!  In a brief interview with Saxby’s barista and Student CEO, Gigi Furlan, Furlan revealed that the drink she makes the most for students during finals season is a cold brew iced coffee, typically with added shots of espresso for an extra boost.   Furlan explained that this drink is not only frequently ordered at this time of year, but that it also is very effective in giving students that extra boost!  Interestingly, at the Starbucks, barista Arianna, also found that regular iced coffee or cold brews were the most common beverages ordered by students.  Students tend to grab the same caffeinated drink whether they are in the heart of SJU or on the outskirts of campus.

While baristas gave us a behind-the-scenes perspective, we thought it would be helpful to get some perspective from the consumers as well! In an interview with Loren O’Brien, class of `23, she informed us that her go-to is a Rockstar energy drink.  Rockstar is sold in the P.O.D. markets on campus as well as most vending machines.  In another interview with student Keyon Pierce, class of `23, he said that his favorite pick-me-up is a hot latte with a bag of chips from the vending machine. While most people may think that extra caffeine is the answer, it turns out that students often turn to a simple coffee and snack to keep them going through their studying! Of course, caffeine affects each person’s body differently, that is why we set out to show all of the options that are available on campus to give busy students that extra bit of artificial energy to keep their studying efficiency at its maximum! 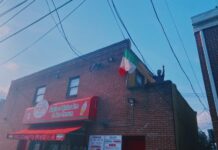