The cherry blossoms have bloomed, there are clear skies, and we know spring has approached us. Now that spring is here, Saint Joe’s students know finals are quickly approaching as well. Students on Hawk Hill are running around to meet with group projects, office hours, and meet deadlines. With all of this work, we hawks are in need of a break!

Saint Joe’s hosts a yearly spring concert for students to enjoy in the midst of this stressful season. The spring concert includes student performers that debut their talents before the main act. This year featured a student DJ, dancers, and even a yo-yo show. Then came the main attraction of T-Pain, American rapper and singer-songwriter. Students were also looking forward to Waka Flocka Flame, American rapper, who had to cancel last minute. 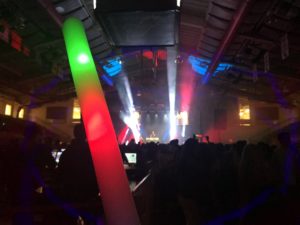 SJU forms a committee to organize this grand event, which gets about $112,000 to spend on the night. This money comes from the activity fee included in tuition, $85,000 of it usually spent on an artist. Within the past few years, Saint Joe’s has featured rappers for the Spring Concert such as Ludacris, Macklemore, and Mac Miller who performed last year. The committee has ventured out into other genres, but haven’t had the results that they had hoped. Two years ago, the featured artist was Panic! at the Disco, an alternative/rock band. Senior Cassidy Williams says, “It was weird, it didn’t seem to connect with Saint Joe’s students as much as the rap performances have.” This concert didn’t end up selling as many tickets as the committee had hoped and was opened up to the public as well as the Saint Joe’s community.

This is the first spring concert on a college campus for many students, specifically freshman. Most freshmen seemed very excited for their first SJU spring concert. Freshman Emily Bolton says, “I’m excited because there’s such a buzz about it around the school, you can’t help but be excited!” Freshman Elaina Wall agrees, “I feel like Saint Joe’s cares so much about this year’s concert, especially the upperclassmen, and everyone is feeding off of that.” Despite many freshmen being excited, some chose not to attend. “I’m not going because I’m just not a huge T-Pain fan and I have no money,” says freshman Flynn Martin.

Although upperclassman Hawks have been here awhile, many of them attended their first SJU concert this year. “I’m going to the spring concert this year because it’s somebody who I listened to growing up when I was introduced to hip-hop. I’ve also never been before,” says senior John Yurkoski. When asked about not going in the past, he added, “the spring concert is always during the NBA playoffs and I haven’t been as interested in the artists.” For freshmen and seniors alike, it seems as though this spring concert had more anticipation than in years past. Students began to prepare for this event by creating a Spotify playlist with T-Pain’s music.

Waka Flocka was one of the artists scheduled to perform but had to cancel the day of the concert due to illness. Even though this dampened some students’ anticipation, the concert still lived up to the hype for many. “This year’s concert turned out way better than I expected it to be.” said junior Eric Battisti. “Even though I felt a little cheated when Waka couldn’t perform, T-Pain put on a great performance.”

“The concert was one for the books.” said junior Griffin Pierce. “It was a great time, everyone was having fun and it was a lot better than the past two years.”

It seems to have become a tradition for college campuses to host spring concerts. Bigger campuses and Ivy League schools host well-known performers because they have a bigger budget and can afford the artist. For example, Columbia University hosts a Spring Festival and Dartmouth College organizes a weekend full of festivities and performers. These college students look forward to these events because they are recognized as a break from the spring semester that is coming to a close.

Overall, this year’s spring concert was one to remember. Thanks to T-Pain and all of the people who made this night possible, it’s safe to say that SJU feels like “all we do is win!”