If you’re like me, you have a love for tattoos, and when I say love I really mean an obsession. Maybe you follow @inkspiringtatoos on Instagram or followed Kat Von Dean’s tv show, either way if you’re looking for your newest ink fix look no further then your own backyard. These 4 students offer advice, explanation and beautiful photos on their own personal tattoos.

Sophomore Angie Barone is a psychology major here at Saint Joseph’s. The tattoo she sports on her rib is an outline of a brain with a heart inside of it. When asked the meaning behind why she got her tattoo she connects it back to her major by explaining, “The temporal lobe is where your personality, cognition and reasoning come from. The temporal lobe has an empty heart because I can’t stop thinking with my heart.” To add to her well thought out tattoo, she began her story this year on January 3rd and will end it on her wedding day by filling in the heart. 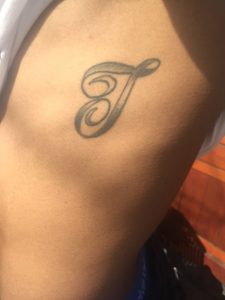 Torey Doaty got his first tattoo in 2014 along with all three of his siblings. The “T” represents the first letter in his name and the fact that all of his sibling’s names begin with a T. The T is the first of his three tattoos. Since Torey is a tattoo expert I asked him what advice he would give to those thinking about getting a tattoo. He says “if you’re unsure don’t be scared to ask the artist for a test trial”. He explains that the artist can draw out the desired tattoo and temporarily put it on you. Think back to your childhood when you would sponge on hearts and star tattoos. Artists use the same technique, who knew? They“tattoo it onto you using water, that way you can actually visualize it”. He also suggests bringing a friend for moral support and to help pass the time. 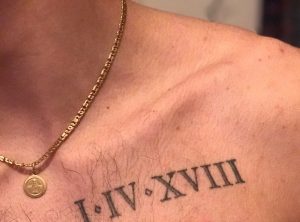 It’s no secret that tattoos aren’t always accepted in society, but I would argue that they are seen as a way to express yourself by everyone. Anthony Laragione is the perfect example of self-expression. Anthony has five different tattoos in all shapes and sizes. Naturally with five tattoos my first question was, do you find tattoos to be addicting? He responded with a confident yes and backed it up by saying he got three tattoos within one month! His first one was back in 2015, his senior year of high school. When asked what made him want to get all these tattoos he says “I’m the type of guy that stands up for what I believe in and am not afraid to stand out from the rest”. Besides the fact that his tattoos are brilliantly done, I love that they are truly apart of who he is as a person.

Carlee Harbright’s tattoo is unique in the fact that it honors her father. Her father died of leukemia when she was younger and this hope tattoo is her way of showing support. When I asked why a tattoo to honor her father she says “most people buy a sticker or do a walk in order to raise awareness but I wanted to do something a little different and liked the idea of a tattoo”, and I’d have to agree with her.