1). The People Who Have More Creamer Than They Do Coffee

Do you want some coffee with your creamer? These are typically the people that are starting to get into coffee because they realized that now that they are now college, they can’t have a steady sleep schedule and if they don’t drink coffee, getting up and going to class is practically impossible. They didn’t drink coffee before because they didn’t like the taste, so saturating it in creamer is the only way to go. Thank God for Campion’s creamer machine.

2). The People Who Drink Iced Coffee In Winter

There’s snow on the ground and you’re drinking iced coffee? Some will look at these people
wonder why they would make miserable days in winter that much more miserable. On the
other hand, these kinds of coffee drinkers just like the flavor of iced better, and don’t think
twice about the fact it is the same temperature as the brisk weather outside.

These people will do anything, and I mean ANYTHING for their caffeine. Types 1 and 2 look at them as if they’re crazy, but they are actually just experienced with coffee. I’m sure most black coffee drinkers also enjoy something more creamed down every once in a while, but they also don’t mind something simple as long as they get energized. They are brave, they don’t discriminate, and they are also least likely to complain about where they get their coffee.

4.) The Starbucks or Dunkin People, That’s It 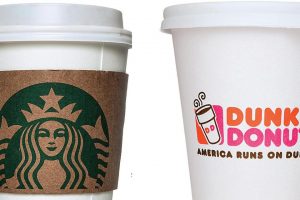 Dunkin/Starbucks cup in one hand, phone in the other. These people have probably never utilized a Keurig or other type of coffeemaker at school. With so much DB, why worry about all of the money you throw away towards Caramel Macchiatos and Iced Vanilla Lattes? Sometimes, there’s just something about having it made for you by people behind the counter and always having it taste the same distinct, delicious way. Coffee from Campion doesn’t sit well with these people.

These are the people that make their coffee in their room and bring it to class in cups like those thermal mugs or even the ever famous Swell Bottles. The fact that they have a Keurig in their room just points to the idea that coffee is their life. These people most likely wouldn’t stop themselves from splurging on a coffee at Starbucks or Dunkin, but they are also comfortable enough being their own barista.