With Sunday being 70 degrees in the middle of February, it was surprising yet welcomed surprise. It brought many of us out of our dorms and apartments to soak up this warm weather while it lasts. Here’s what you’ll find around campus.

“Sunbathing” on the Villiger Lawn

While walking through campus on Sunday, it was hard to not notice all of the people out with beach towels on the Villiger 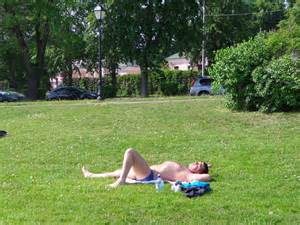 Lawn trying to get some sort of a tan in the middle of February. This conversation is definitely going to happen at some point this week.

“OMG you’re so tan!!! Did you go to the Carribean or something?” Na, I went to the Villiger Lawn.

Sweeney Field was packed on Sunday. They somehow managed to get 6 games of soccer going on Sweeney Field at one time.

Apparently one of the prerequisites to playing soccer on Sweeney is to never have kicked a soccer ball in your life. Stick to FIFA.

Try walking outside Villiger and you are guaranteed to be dodging frisbees left and right. Why doesn’t anybody actually know how to throw these things around here?

Frisbee Throwing 154 needs to be apart of the curriculum. Cura Personalis right? And even if you’ve managed to dodge every frisbee,   don’t blink or you might get laid out by a dude in a muscle shirt making a diving catch…trying to show off for the girls out “tanning.”

People Playing/Lounging on Every Single Blade of Grass on Campus

One of the benefits (or drawbacks, if you like concrete, I guess)  to SJU compared to the other Philadelphia campuses like Temple is how much greenspace there actually is here. Sure, we’re in Philadelphia but SJU somehow managed to carve out a nice suburban vibe on campus that you might not believe was in the 4th Largest city (Houston doesn’t count…let me have this)  in America. Somehow, however, SJU students were managed to utilize every lawn or field on campus. My friends and I went to play a sport with a ball (okay, yes we went to play soccer) Sweeney was packed, the Villiger Lawn was packed, that muddy field on Maguire Campus was packed, and that little patch of grass in front of McShain was also packed. We walked back to Pennbrook defeated, but at least we didn’t get hit with any frisbees.