Many people around campus have all seen The Hawk, our SJU mascot flapping its wings with pride during our basketball games. Every now and then, we get lucky enough to see The Hawk around campus filling it with school pride. The Hawk is seen mostly as a mascot, and no one really knows the person that dresses up in the hawk suit. Who is the face behind the mask?

We caught up with multiple SJU students to ask them this very question and the consensus was more of the same: no one knows the hawk. Kadar Namey, a junior here on Hawk Hill, had this to say when we asked him about our school mascot: “I feel like very few people know who the hawk really is. We just see him or her as the hawk, and don’t really think too much about the fact that there’s an actual student behind the mask and they’re just like one of us.” Tim Johnson, who is also a junior at SJU made an interesting point and said, “Any one of us could sit next to The Hawk in class and we would never know.” This is kind of a funny way of looking at things, the unknown identity of The Hawk  makes it quite the mystery when you see him constantly flapping its wings in Hagan Arena. 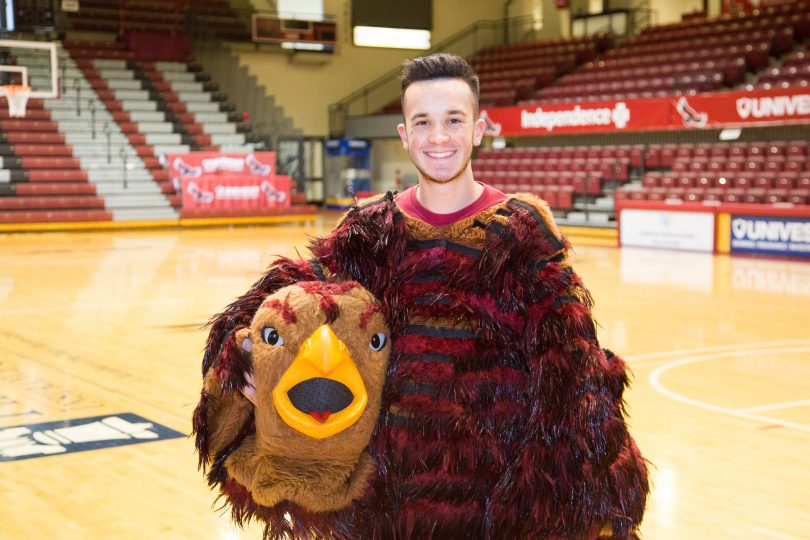 To help you get to know the face behind The Hawk a little better, we decided to ask the senior Sports Marketing major a few questions about himself and his life as ‘The Hawk’.

What are your responsibilities as being the school’s mascot?
​Primarily, I work directly with the Men’s Basketball team as a student manager. I’m there for every practice and travel with them for away games. On top of that, I obviously serve as the mascot for Men’s Basketball games and I make appearances as the Hawk on and off campus.

How has being the Hawk shaped your college experience?
​It’s been incredible (being the Hawk) since the spring semester of my freshman year and it’s sort of funny how things have come full circle. I got started helping Timmy Parks, then the current Hawk, with appearances at the end of my freshman year. I really enjoyed it and stuck with it. A position had opened up to be the Women’s Basketball mascot by sophomore year. I jumped on it and spent the last two years with them. Now I’m back with the men’s team as the Hawk for my senior year. It’s been incredibly fun these past few years being the school’s mascot, and I’m very grateful for the opportunity to do so.

What did you have to do to become the Hawk?
​Contrary to popular belief, to become the Hawk you do not have to win a “flap-off.” My application process was a lot less exciting. I wrote an essay about why I wanted to be the Hawk and what it meant to me and I interviewed with former athletic director Don DiJulia and Coach Martelli. Then, I had a subsequent meeting with Coach to let me know that I had been selected; that was it, no “flap-off” or anything crazy like that.

What are the perks of being the Hawk?
​Obviously getting a full-ride for being the Hawk is huge, but it’s much more than that as well. I love getting to work with the men’s team directly and serve as a manager for them, it’s a lot of fun to be around the players, coaches and staff every day. Beyond the scholarship, I get a lot of little perks as well: SJU gear, the earliest class registration time, free books and more. Being the Hawk requires a lot of hard-work and dedication but there’s a lot of reward to be had if you’re willing to put in the time.

What are the cons of being the Hawk?
​I wouldn’t really say there are any cons, it’s a really awesome position to have. I do remember though when I first became the Women’s Basketball Hawk, I was a little disappointed that I didn’t get the same amount of recognition as the Men’s Hawk, even though I did the same amount of work. After a while though, I came to really enjoy the anonymous aspect of it; it felt as though I was a real-life Peter Parker or something. 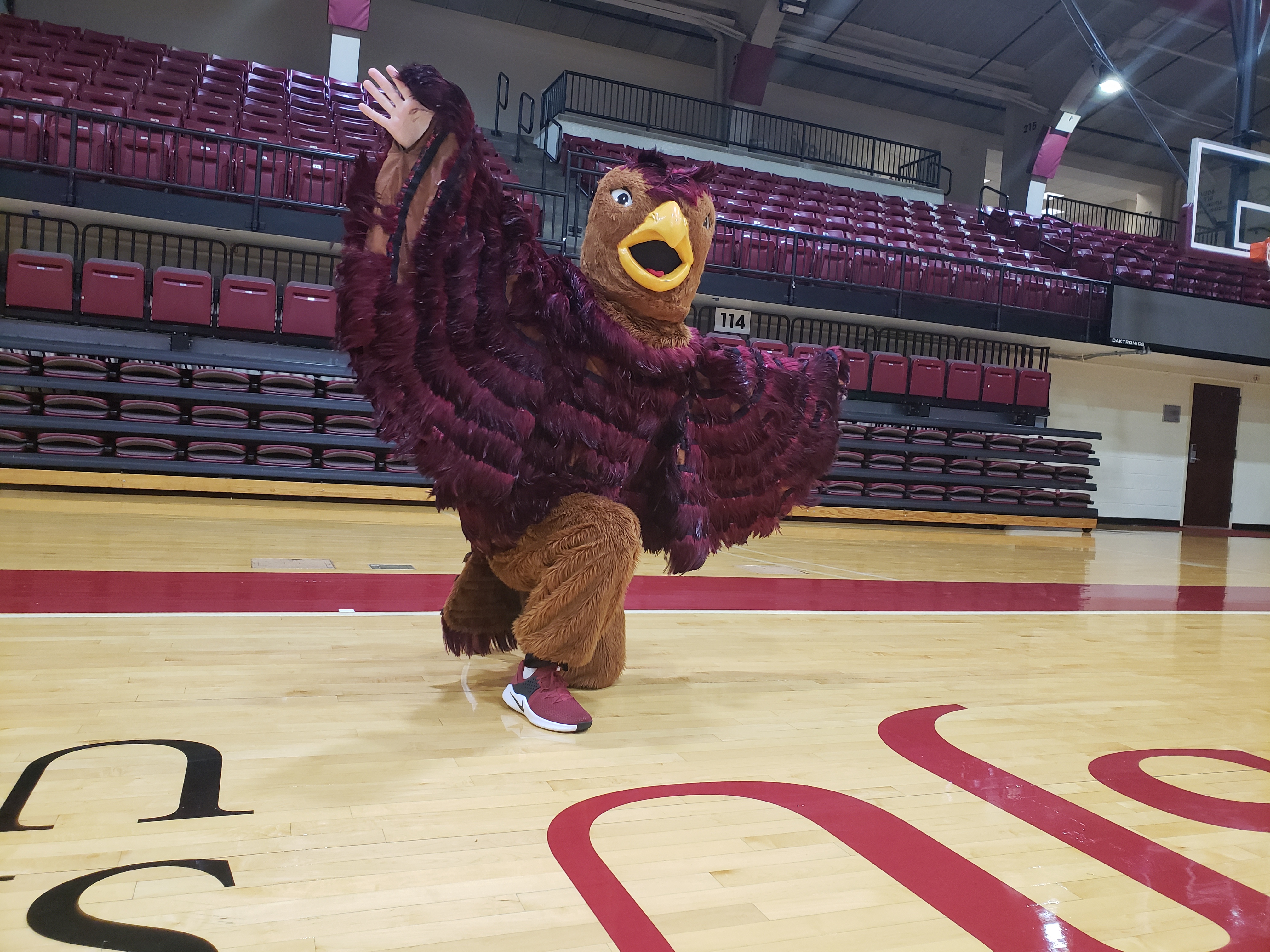 How do you balance it all?
​It takes a lot of time management and attention to detail. School comes first and foremost, and I carve time out of my day to make sure I get my work done. You have to know your limits and balance your schedule accordingly. I’m in the gym four hours a day when we have practice so I often have to spend more time in the library on days that we have off. I keep a hand-written calendar with all my appearances, homework, and other activities going on and that really helps me stay organized, but it really depends on the person and how they manage their time.

Walk us through a game as the Hawk. Is your performance planned or do you wing it?​Before games I help the managers get set up with their supplies behind our bench, and I rebound for the players to get my arms warmed up. Then once I get dressed and come out flapping as the Hawk, I go into “mascot mode.” Sometimes there’s an event at halftime that I have to take pictures for but beyond that, my role is typically not scripted. I just try to interact with the fans, taunt the other team/mascot and have fun. The biggest key is being yourself and representing the school as best you can.

What’s your favorite part of the job 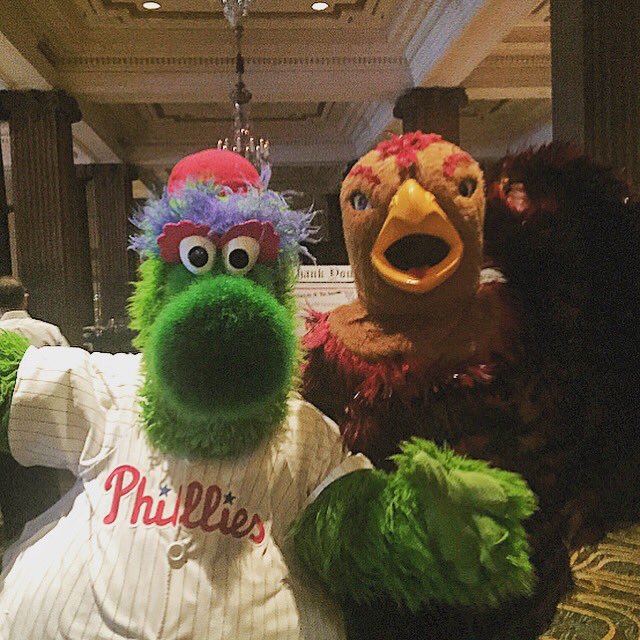 Getting to mascot at basketball games is a lot of fun and I’m really looking forward to this season. Beyond that, some of the off-campus appearances that I’ve done have been a lot of fun to be a part of. I’ve been able to get to know the other Philly college mascots, as well as The Phillie Phanatic from the Phillies, Swoop from the Eagles,Franklin from the Sixers and most recently, Gritty of the Flyers. It’s honestly our own “fraternity” and there’s a mutual level of respect between us. Overall though, making people smile and getting the excited about Saint Joe’s has undoubtedly been the most 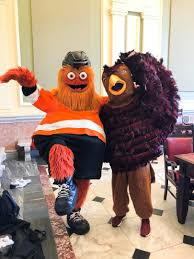 rewarding part of my job.

What is something that people don’t know about you?
​It’s not related to mascotting, but I hate salad. Easily my least favorite food out there. My grandma doesn’t like lettuce at all, so I probably got my distaste for salad from her.

Do you have any special talents?
​I wouldn’t say that I have any special talents, but I am a really bad dancer and I think that complements the character of the Hawk. I just try to be myself and be goofy while mascotting. The goal of it is to make people smile and laugh and have fun representing the school, and I think I’ve gotten better at that as I’ve gained experience being the Hawk.

Even though the identity of The Hawk remains a mystery for most students, the duties of The Hawk is another aspect that makes him unique and even more unknown. Throughout the course of a basketball game, if you key in on The Hawk, you may notice that he never stops flapping his wings. Not even during a stoppage of play, like a timeout or halftime. You may find this humorous and might just think, The Hawk does that because it’s a bird and flies. The flaps have a much deeper meaning than you think. We always hear the saying “The Hawk Will Never Die” or many hashtags on social media as “#THWND.”  He never stops flapping his wings because it is a symbol of school pride, The Hawk is never out of the fight, and is always filled with school comradery. The Hawk is truly the hawk that never dies!