Followed By a Bear is an awesome club that everyone at Saint Joe’s should know about! This is a completely student run theatre group where everyone can direct, act, or write (Or do all three, its up to you!). This club was thought up by alumni John Rheiner and Sequoia Collier-Hezel in 2013 and then in 2014 they had their first night of scenes.

In this club the leaders want to promote creativity and being a part of a community. So they bring in all the students who want to write together and have them write scenes for a show and from there they have auditions for the actors and have their directors sorted out. 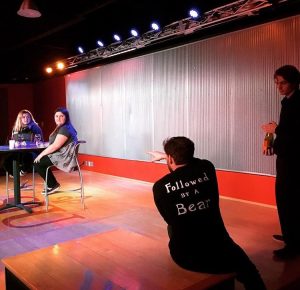 This semester was the first night of scenes I participated in and I absolutely loved it! Everyone is so welcoming and helpful, I could not imagine anyone not having a good time with this process. I spoke with one of the executive board members Morgan Yearick 18′ about why she joined Followed By A Bear and why people should join. She responded saying “Personally, I joined the club because I love theatre and performing and wanted to get as involved in college as possible”. 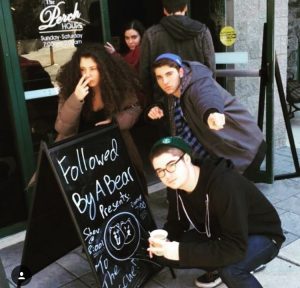 Talking about why others should join the club she says “People should join because it’s such a welcoming community of people who really want to see everybody succeed. Anyone who wants to perform, write, direct, has the opportunity to do that with us…. it’s really a learning experience for everyone involved and we always make an effort to be as inclusive and supportive of our members as possible”.

If you want to come check out the club its not too late! Even though the night of scenes has already passed we will be putting on a production of A Wake,  an original play written by writing team of Followed By A Bear. If you want to come see it, it is going up in the Perch on May 4th!