Did “What’s Your Snapchat?” start your relationship?

In the past, people called or texted their potential significant other. But now, some gravitate towards asking for their Snapchats.

Snapchat is an app where pictures take priority over words. It can seem more casual and is easier to forget since the messages delete themselves. When asking someone for a cell phone number, the messages save unless they manually delete them.

Does the difference have something to do with what a person’s intentions are? Or could it have anything to do with the changing generation and society? It may be that the world is straying away from words and communicating less and less. Six Saint Joseph’s students share their ideas.

The difference for most students was whether or not they wanted the conversations to be personal or just casual. 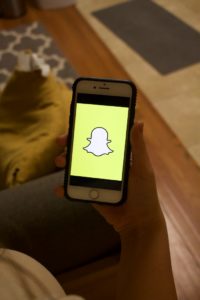 Most girls wanted the method of communication that they felt was more personal, and boys wanted to use the more casual option.

Students were asked how long it takes for them to transition from Snapchat to texting. Almost all said it usually takes an average of two weeks to cross that line.

It seems as if teenagers may prefer texting when it comes to being interested in a person, but it can go either way. Depending on the person, time, or stage in your life, some want a more serious conversation and some more casual. They use the platform that matches.