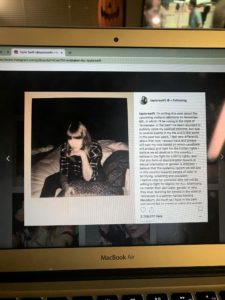 As many fans know, Taylor Swift has never been one to vocalize her political opinion on a public platform. It’s no wonder that when she posted about a couple Tennessee Democrat nominees on October 7th, it sparked a wave of responses by the general public that’s been felt around the political world.

Many studies have been conducted about how social media, such as Facebook, Twitter, and Youtube, have helped its users to become informed and ultimately react faster to political arguments and news. It is through these platforms that celebrities, such as Taylor Swift, can alter viewers perspectives on what and what not to believe regarding political choices.

Social media’s magic is held within the idea that we can be in direct contact with important figures through the touch of a button, it’s no wonder that generations that are avid users of social media platforms are finding it to be their main source of gaining insight on the economic and governmental issues that arise around the country/globe. If there is news to be heard in the political world, it is through mostly Twitter and Facebook that one will most likely go to hear about it. This ease of access makes it a widely accepted space for voicing one’s opinion. Because of this, it gives any person the right and ability to project their understanding and stance on specific political matters that can be up for interpretation by anyone else. Any voice can be heard on a spectrum as open and limitless as social media presents.  So whether it’s the direct quotes of a powerful politician or one of your friends throwing in their two cents about the upcoming election, everything you need to know is at the palm of your hands and being updated 24/7. 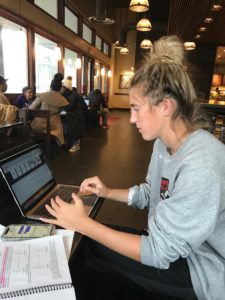 So what does this mean for college students like us? If you’re not completely up to par on your political current events or maybe you just want to understand a certain position more, you can easily catch up using the social media apps we’ve come to use so regularly. It’s so common to stumble across political posts and tweets when using social media – chances are it overtakes your feed/timeline during big events too. It is through this type of exposure to information that we have come to know so much about politics and economics;  just through the use of digital platforms like Facebook, Twitter and Instagram.

Although, the sharing of political news has benefitted young generations so much, there is a downside to its rapidness. Social media platforms are home to political campaigns, every tweet and post about it makes a difference for that party. Because of this, stories and information affect the campaigns, whether they’re fake news or not. Before social media became so prevalent, the main source of learning about political news was through the newspapers,  which took days/weeks to publish and were often speculated thoroughly for correctness. On social media, you can’t do that with every single post. So although you are reading about many opinions and their supporting arguments, there’s no saying what’s biased or not.

What does this mean?

Social media has only been introduced to us in recent years, but its impact has shaken the political world to its core. With each new social influence comes change and adaptation. There’s no doubt that politics will change in conjunction with social media, but it is just a matter of where this social influence will take us.