With the arrival of the newest iPhone model, always comes an update, and although there aren’t many huge changes this time around, one in particular stands out in the IOS12. Apple has added a feature called Screen Time, which shows in frightening detail how much time individuals spend on their phones each and every day.

This feature is found within the settings app, and it shows exactly how you use your device throughout the day. It tells you how many times you pick up your phone a day, how many notifications you get, and how long you spend on each in particular app. It also gives a shorter summary with how much time you spend doing different tasks like social networking, games, and reading/reference. The amount of detail apple is able to include in this screen time summary is almost disturbing.

As a college student I know that I spend a significant part of my day looking at my phone, but the exact amount shocked me. I spend an average of 5 hours a day on my phone, which may not seem like a ton, but when factoring in how much time I spend on off screen activities, I am on my phone a significant chunk of the day. I sleep about 6 hours a day, sit  in class for approximately 3, work for at least 2, and spend the rest of my free time with friends, exercising, or doing school work. However, this update has made me realize that clearly I should add another category of activity to my day: phone usage. 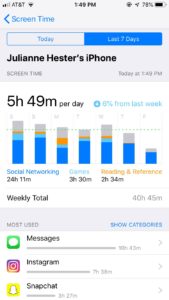 I feel like I represent the typical college student, I spend a lot of my time texting my friends, constantly making plans, and keeping up with my peers who don’t go to SJU. I also spend a significant amount of time on my favorite social media apps which include Instagram, Snapchat, and Twitter. Apps like Gmail, Canvas, and other school related features also take up a significant amount of the usage percentage.

When looking into this update, I was curious to know what amount of time other people spent on their screens compared to me. I found someone who spends significantly less time on their phone than me. Frantz is an athlete here at SJU, and believes that spending so much time looking at a phone is unhealthy. He tries to limit his usage as much as possible. He spends 2 hours and 20 minutes on his phone each day, which is impressive compared to obsessive iPhone users like myself. When asked what he uses his phone for, he says “I use social media every once in a while, but I mainly use my phone for getting the news”. He believes that having faster access to information is what is important about phones, but also understands that people use them too much and rely on cell phones for communication rather than speaking face to face. 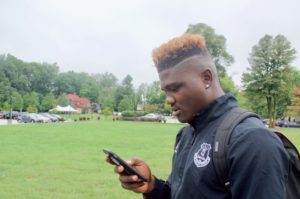 After learning how different Frantz’s phone usage was from mine, I thought it would be interesting to see what someone in an older generation’s screen time would look like. I decided to ask my mom what her data usage was. My mom is a huge believer that cell phones and social media are ruining our lives, she reads books about the impact of social media and calls me frequently to tell me all the reasons why my phone is making me crazy. My mom spends an average of 30 minutes on her phone a day, which is very impressive in my eyes.

This update has made me realize how disgusted I am with myself for spending so much time of my day staring at a phone screen. Before this update, I could pretend or rather ignore the fact that I may be addicted to my cell phone, but now there’s no way of hiding from the ugly truth. What I have learned from this update is that I would like to limit my screen time usage each day, because the fact that I have been staring at my iPhone for so much time in a single day, is very scary.