Who are the Kardashians? Why do we love them? Why do we hate them? This week, HawkChill members interviewed several SJU students to figure out just what students thought about the social media sensations. 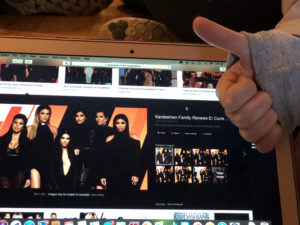 “I think that people are so obsessed with them because they live such a glamorous life. When you have all of that money and you’re part of such an empire you’re bound to have attention. I like to see their houses and cars and parties because it makes me wonder what exactly I would do if I was a millionaire with a ton of millionaire sisters.” said one interviewee. This observation was common throughout the interview process, people claimed to enjoy watching the Kardashians through social media and their TV show because they have such a lavish lifestyle.

“I think seeing that kind of lifestyle makes you want it, even though maybe that’s shallow or materialistic, I don’t know…Since they have so much influence, it kinda makes me wonder if they’ve set some sort of idea in our heads that we should all want that or that we are all missing out somehow…I don’t personally feel this way, I just think that’s how it might come across especially to young fans.” This point was made by another SJU student, which is a summary of how other students besides him felt about the Kardashian lifestyle and how it may negatively set a standard of unrealistic expectations. Many people mentioned that their makeup, fashion, appearances, food, cars and activities are so fun to watch, but when asked some of the students saw the show as a bad influence for some younger fans as well since “it doesn’t really portray what a normal family is like.”

Besides the serious observations, some took the Kardashians a little more lightheartedly and touched on the fact that they definitely aren’t a normal family: “I just find them to be hilarious, the show is so funny and dramatic when they fight…I wonder if it’s ever planned or if it’s actually real…..I think my favorite person to watch is Kourtney, because she seems to have it together and she’s just so funny. I need her and Scott to get back together” The Kardashian drama never fails to amuse, especially relationship drama apparently. When asked about the Kardashian family, many people mentioned Kanye West, Scott Disick, Travis Scott, and Tristan Thompson, all of whom are fathers and significant others of the Kardashian and Jenner women. These connections just add to the obsession, since these men are popular from rap music and basketball and apparently Scott is credited with “just being funny” and the abundance of adorable babies is “too cute not to watch!”

Not only do the Kardashian and Jenner women have successful significant others, they themselves are also very successful in their fields of work. Multiple SJU students mentioned that they show interest in the Kardashian’s work, and some have even tried their recommended makeup products. Kim and Kylie have their iconic makeup brands, Kendall is a worldwide supermodel, and all of the sisters promote or are partners with various companies that really prove them to be business savvy. Their personal apps, social media presence, and businesses all add to their platform. The only one who doesn’t seem to use his Kardashian connection is Rob, the brother of the family who tends to stay out of the media the most. 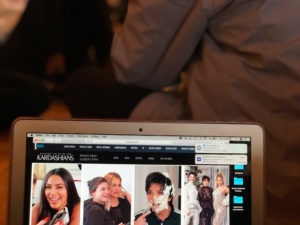 Of course all good things must end, meaning good things said about the Kardashians. Some SJU students claimed to not know them very well and not care about them, which was the second largest category of results besides interest or positive feedback. A few people claimed to find them annoying, and find it weird how people are obsessed over them and their materialistic lifestyle, but the people who disliked them seemed to not care enough about them to give long, detailed reasons. One person did claim, “I don’t hate them, but I find them to be annoying and the way they intoxicate media is a little ridiculous in my opinion…I also don’t know how I feel about Kim and Kanye making trips to the White House, but I’d probably give them credit or the benefit of the doubt for that since they’re probably just trying to help…still, I find it weird.”

So, what do you think? There’s a large range of opinions on the family at SJU, and for multiple reasons why, but what are your thoughts on the Kardashian clan? Can you keep up?