With more and more millenials jumping on the health bandwagon, vegetarianism and veganism is on the rise. Adapting to the vegetarian way of life, however, is easier said than done – especially for a young, broke college kid.

At Saint Joseph’s University, Campion dining hall is the primary spot for freshmen to chow down. With a mandatory (and expensive) unlimited swipe plan, why not take advantage of the food provided? 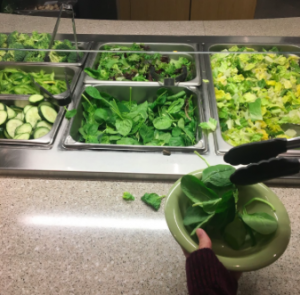 However, the expensive, unlimited swipe plan proves uneconomical for vegetarians. This is due to the astounding lack of appetizing vegetarian options in Campion. With not much more than salads and omelettes to eat, vegetarian student do not utilize the dining hall nearly enough to warrant these swipes.

We have interviewed two vegetarians/pescatarians about their experiences with the vegetarian options in Campion. In addition, one of our writers became vegetarian for the week to get a firsthand look (and taste) of the fare.

The first interviewee, Bella Cocozza, was a vegetarian for two years before coming to Saint Joseph’s University. Her reason for becoming vegetarian was mainly because red meat made her feel gross. Sticking mainly to chicken and fish, she slowly eliminated meat altogether.

Upon arriving to Campion, Bella commented, “it was really hard to find vegetarian options at SJU and I found myself only eating in my dorm. There were not good options at all. I could only really pick from the omelette bar or the stir-fry station. I stopped eating at the stir-fry station because it made me sick after one day.” Bella further commented that the vegetables rarely looked fresh. Never feeling full or satisfied, Bella resorted to outside grocery shopping–an expensive option.

Similarly, interviewee Alex Bewley, a pescatarian of six months, had a similar experience. In response to a question about the unlimited swipe plan and vegetarian options, she stated, “first semester freshman year I had an extremely hard time with Campion. I felt like there were not a lot of seafood options or an easy way to get some protein without eating meat. I felt so strong about this that I decided to try to opt out of having the meal plan for the second half of freshmen year. I did not want to pay for something that I absolutely did not use.” Alex, as well, never felt satisfied after a vegetarian Campion meal and eventually got the mandatory meal plan revoked. 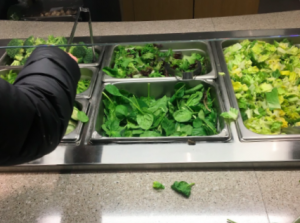 Evidently, the vegetarian options at Saint Joe’s are seriously lacking. Unless you are into unfresh vegetables and omelettes, you’ll have to look elsewhere. As for our freshman writer’s experience as being vegetarian for a week at Saint Joe’s, she can now testify that the options are unsatisfactory. For the first few days, she only ate salads then branched out to omelettes and the vegetarian section, but neither were particularly great. She gave up by day four.

Campion’s dining options seem to be set in their ways for now, and other options require spending more money, even though freshmen are already required to purchase the unlimited meal plan. Acme, Whole Foods, and Honeygrow seem to be the most viable options for students weary of Campion’s repetitive food. Until policy allows for a variation in freshman meal plans, best of luck to all our dietary-restricted readers!