Mia Messina ’25 is a first-year student from South Philadelphia. She is enjoying her first year at Saint Joseph’s University as a Communication Studies and English double major. She and her family are very local to the area; her mother also attended St. Joe’s, and her older brother is a junior at West Chester University in West Chester, Pennsylvania. In her free time, Mia enjoys reading, writing, and photography, particularly sports-related content.

Mia discovered her love for taking pictures in high school after their baseball team asked her to be the team’s photographer during her senior year. She is currently enrolled in a news reporting course which could potentially allow her to become a staff member for The Hawk, our university’s student newspaper. Mia had already photographed for The Hawk prior to taking the class, though. She has taken pictures for the newspaper of the men’s baseball team here at Saint Joseph’s University and said it was a great experience. When asked what it was like photographing for a D1 college team, Mia told me it was very fun because she felt like she was always learning something new, whether it be about angles, lighting, or

Her older brother also plays baseball at West Chester University and said it was fun being able to photograph his school’s rival team. Mia’s dad coaches baseball at her high school and also works for the National Hockey League (NHL). As you can tell, sports are all too familiar to her. Having come from a family that is very sports-oriented, it made her think she wanted to avoid being around them. Although, as she got older, she began love to them. Watching and going to games became more fun for her, and now wants to pursue sports broadcasting and journalism after college. 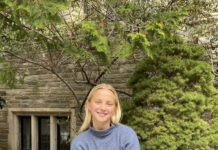 How To Start Your Week Off Right

Tips for Landing a Summer Internship

Club Spotlight! Followed By A Bear!