When complimented on her adorable shirt, Saint Joseph’s University senior Megan Szabo completely ignored the compliment and said, “It has a little run in it right here.”

Does this type of reaction sound familiar to you?

As women, we are told that we should build each other up and make sure our friends, sisters, daughters, and mothers feel confident in their skin. So why don’t we treat ourselves the same way?

In female friendships, we point out nice things about each other all the time but for some reason the woman being complimented rarely accepts the compliment with a genuine, “thank you”. Instead, she usually responds with a sigh and self-deprecating comeback such as, “omg, not uh” or “ew, shut up.” This has become a norm in our society due to the stigma among women that it is socially unacceptable to acknowledge how great you are or how pretty you are. It is perceived as conceited and cocky and we are threatened by it.

Look no further than Mean Girls for proof of this. The seemingly normal response “thanks” to the compliment “you’re, like, really pretty” elicited this perplexed, judgemental reaction:

There are generally three ways that girls avoid the simple acceptance of compliments:

According to a study by sociolinguist Robert Herbert only 22 percent of compliments given to women, by women, were accepted. This statistic rose to 68 percent when it was a man, rather than a woman, giving the compliment. Herbert’s study also compared these findings to other cultures such as South Africa. Compliments were rejected by Americans over 63 percent of the time, while less than 24 percent of South Africans rejected the compliments. 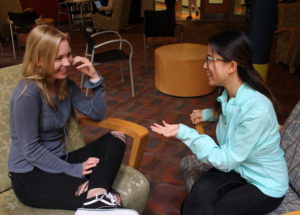 Clearly, this issue is most prominent among female-female interactions in American culture. The media is full of unrealistic, unattainable standards for how thin a woman should be, how trendy she should dress, how clear her skin should be, etc.

As writer and self-care advocate, Jane Travis, said: “If you wouldn’t say it to a friend, don’t say it to yourself.”

Ever notice how you and your friends ignore each other’s compliments? Check out hawkchill.com to see what we found after researching this theory.

Recording an EP with 54th & City

20 Thoughts that go through your Mind when walking through the...