Leaving your best friend is hard.  Especially if they’ve been a part of your life for a while. At some point, you have to walk away from your loyal companion of whichever breed.

This attachment to our four-legged companions has existed for centuries, and has not ceased yet.  W 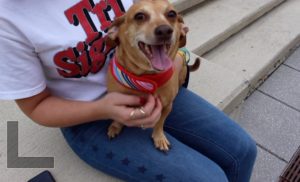 e questioned how and why humans have developed this attachment to canines.  In what ways do our interactions with dogs create a warm and fuzzy feeling within us?  Is it sorcery?  Or merely scientific?

Interactions with dogs stimulate a release of dopamine (a chemical which sends both positive and negative messages to the brain), according to countless studies.  This creates positive feelings, and a bond with your pet. It is also believed that dogs alleviate stress.  So much so, that Harvard Medical School houses a therapy dog of their own.

With several studies performed under this topic, there is no doubt that these conclusions are correct… right?

We decided to test these theories by bringing a furry friend to campus (Saint Joseph’s University).  With that, we could create our conclusions by our own observations. 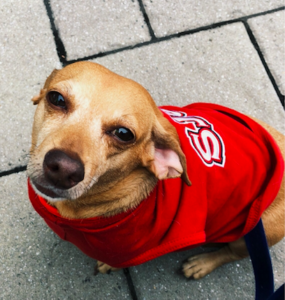 Meet Skittles – a 9-year old, approximately 6-inch tall Chiweenie – who was as eager to meet new people as they were to meet her.

Our first location was between Barbelin and Drexel Library, hoping to attract a crowd of students. While we set up gear, Skittles began to draw attention. People began approaching left and right to pet her, as if she were irresistible.

Then, we made our way into the library. Walking Skittles while carrying a welcoming sign immediately drew people to her.

After that, we relocated directly outside of Villiger, a freshman residence hall. Students came in droves wanting to greet Skittles – she did nothing but welcome them in return. 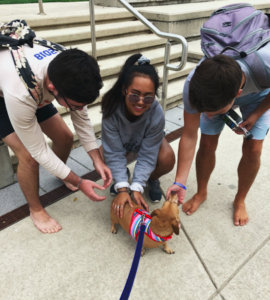 When asked whether Skittles aided in relieving their stress, students unanimously agreed that she did.

After our experiment, we were able to conclude that scientists were correct.  Everyone we encountered shared a smile, whether they pet Skittles or continued walking.  Not only that, it was often stated that petting Skittles helped to relieve everyone’s stresses – including our own.

A straightforward response came from SJU freshman, Tayler Washington. “…I’ve been having roommate issues and am currently commuting until I get a new dorm, so it’s been tough…” she says, contently petting Skittles. Washington continues stating, “If they had therapy dogs on campus, that would definitely change my Saint Joe’s experience.”