Every year the Saint Joseph’s Entertainment Marketing Class hosts their benefit concert Rock To Remember where local artists perform live, typically in a local venue. While it may look different this year, the event is adapting to the virtual concert trend much like the rest of the music industry.

The two-nighter event will take place Thursday, May 29th and Friday the 30th 8pm-10pm on Zoom. Five local musical artists are scheduled to perform throughout the duration of Rock to Remember, including 2 student artists.

Those expected to perform include Shishira Philip, Ionika, Nick Shisler, MatRAD, and The Attire. Their setlists cover a variety of genres with soul, rap, and alternative artists so there is something for everyone to look forward to.

For those unfamiliar with a Rock to Remember, it is a fully student run event with limited help from SJU staff. The night class of 24 students plan the concert from start to finish as a part of their curriculum including facilitating fundraisers, acquiring artists, and running the event the nights of.

Entertainment Marketing Major, Hadley Champe feels “This class is one of the best steps into the industry. It has really shown me what it takes to put on a production from start to finish.”

While the class is supervised by a professor, the students are put in charge of making the event come to life based on their taught curriculum. As part of their final grades, the students have put together a variety of presentations, discussions, and videos documenting each part of the event planning process.

Some of Hadley’s contributions have included reaching out to artists to pitch to the class as well as reaching out to local businesses for fundraising opportunities. Her classmates have also created promotional social media posts, Venmo boards, and other key elements to make the event possible.

The class was in charge of coming up with the artists based off their experienced opinions on what would work best for the student body. From there they researched and contacted specific artists to create the diverse set list for the event. This was truly a product of their hard work and effort from start to finish.

Rock To Remember has been a staple project of the class for the past 9 years however, this year the concert faced extra challenges due to COVID guidelines. Some worries are the logistics of production as well as maintaining audience engagement in a virtual environment.

During the event, students will not have as much control as they have in the past. Rather, the artists will be expected to turn their camera and microphones on at allotted times from separate locations. Artists also will be using their own equipment.

Tuesday, the artists will do a Zoom soundcheck to work out any glitches or errors with SJU’s Technology Department.

For concert performer Shishira Philip, a junior R&B and Soul singer and VP of Hawkapella, this will be her first virtual performance which brings some excitement and nerves.

She explained, “I’m making sure that the music is balanced well through Zoom, and that the camera works perfectly. Another thing is making sure that WIFI works, and does not cut out randomly throughout.” With help from IT it is hopeful the concert will run smoothly on a technical level.

When asked about her thoughts on the virtual concert experience, she claimed, “There are some things that I am looking forward to, for example, being able to perform after a very, very long time. It’s also more accessible, so the audience can attend wherever they are, as opposed to completely missing it if it was in person. Since there is a lack of audience interaction, it can be hard to understand what the audience is enjoying, or what they might not be.”

As for the engagement concerns, Hadley explained her class has been considering technical features to include on Zoom for audience participation. One potential idea has been a chat function in which attendees can live chat their thoughts and respond to one another. Features like these may help performers like Shishira cater to the audience despite being online.

However some things will not be changing, including the performer and producers excitement to see all their hard work pay off. Shishira is keeping her same ritual of relaxing prior to her set despite the new background.

Hadley and her class also have the same high level of spirits and are grateful for the growth this class has given them, especially given the challenges of this year. They hope for a good turn out of student’s to share this musical experience with.

All proceeds of the concert will go to HawkHUB, a committed network of students, faculty, and staff who are attempting to address food insecurity and basic needs on campus. If you would like to donate outside of Rock to Remember, feel free to provide non-perishable items to their donation box outside of the writing center or Venmo them @HawkHub.

With finals coming up, A Rock To Remember is the musical escape all students need, especially with the ease and flexibility of being able to log on this year from the comfort of your own home.

Tickets are available on the Student Ticket Center for a price of $2-10, depending on one’s willingness to pay. Each ticket will include links to both nights of the concerts, as well as an email sent with the Zoom links.

You don’t want to miss out on this rocking opportunity to hear from the best of Philadelphia’s music! Join us in supporting HawkHUB and the Entertainment Marketing class Thursday at 8! 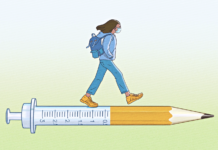