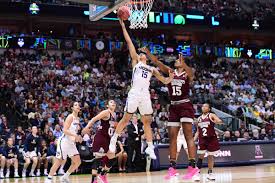 How they get treated

Throughout the past couple years NCAA women basketball player’s have been working very hard to be where they are. They have to work just as hard as anyone else. Waking up early every morning to workout, then going back to the gym to have basketball practice, while still having to go to school. Even in doing this they still do not get the treatment that men’s NCAA basketball players do.

This is not fair and has to change. Some people may be saying that NCAA women’s basketball brings in less revenue and yes this may be true however the NCAA is a nonprofit and should be giving the people that work equally as hard the same treatment.

Recently there was a big debate in the NCAA about march madness and the women’s weight room. There weight room was yoga matts and one set of weights. While the mens weight room had anything you could imagine.

“This is a rich sports organization that claims to care about its “student-athletes” but didn’t care enough about women to do the right thing until their PR people told them how bad they looked.”

The NCAA argument to there small weight room was limited space. Which was completely false because there was an entire empty room where the womens weight room could have been but was never set up. Eventually the women’s players did get a new weight room. They should not have had to go through all of this stress to just get a weight room, this is unacceptable.

The Women’s players at the tournament also got nowhere near as big of a welcome bag for march madness. While the men got a large amount of clothes, shampoo, books, and a huge towel. The women got not even half of that which is very upsetting and something needs to change.

NCAA Women’s Basketball is on the rise, it has been growing in popularity each year. Tv ratings this year have gone up since the past as well as ticket sales. Which is an opportunity for the NCAA to start treating them equal to the men’s teams even though this is not how it should be.

Within march madness the women’s teams saw an increase of viewers by 66%. These were the most viewed sweet 16 games in NCAA Women’s basketball since 2013. With this information WBB in the NCAA is headed in the right direction. There is a clear change in how WBB is getting noticed and more people are wanting to watch. While the NCAA men’s basketball teams have only gone up in viewers for 13%

Within the next couple of years we will definitely see the rise of Women’s Basketball. As well as the NCAA giving equal treatment to the men and the women. That is what we want to see in this world, no favorites just equals. There has to be a change and on the good side there has slowly been improvement but that was with many complaints. Next time it should just be done, no one should have to ask for change it should just be given especially after this march madness tournament showing how Women’s basketball is upcoming and trying to be the next big thing.

Throughout my life I have been a huge fan and athlete of basketball. Why make this article on women’s basketball some may ask. The answer to that is I have had many friends as well as family members who played Women’s basketball and went on to the next level in college. Seeing them go through all this hard work in the NCAA makes me very proud of them. Keeping up with everything and still going to school while playing basketball, knowing this I look up to them

Then talking with my friends and family about it I notice that it is not all good. They constantly tell me how they are not getting what they think they should. At the start I thought nothing of it, maybe they were just sick of the sport and didn’t want to play anymore. Then seeing one thing after another on social media and the news about how NCAA Women’s basketball players are getting no where near of what men are. This made me think what can I do for them to maybe help and put a statement out there.

I knew writing this article would show some people what they have to go through, how it is not fair and needs to change. Although my article will not change this whole issue it is a start to something new and hopefully change a few people’s perspectives on this and to show what they have to go through. To get this out and to be able to talk about it and to let others know what is going on is a start in the right direction. To help eventually get NCAA Women’s Basketball players the proper treatment that they deserve.