Take a minute and think about the last time you treated someone with dignity.

This doesn’t mean holding the door open for the person behind you, or even letting a stranger cut in front of you in line. When was the last time you recognized the intrinsic values of another human being and actually acted on that recognition? Does the person’s gender, race, or whether or not they are incarcerated matter when deciding to treat them with respect?

This notion of human dignity comes into play when talking about “Inside-Out: Dimensions of Freedom,” a joint sociology and English class offered to Saint Joseph’s University students from inside prison. The class, taught by both Susan Clampet-Lundquist, Ph.D. and Aisha Damali Lockridge, Ph.D., delves into race, gender, and citizenship through African-American literature and mass incarceration.

Clampet-Lundquist, Ph.D. sat down to discuss not only the problems surrounding mass incarceration and prisons in the United States of America, but why Saint Joseph’s students should take this course in the first place.

“It allows students to come together, students who are incarcerated and students that are not incarcerated, and talk about issues in a way that they wouldn’t be able to otherwise,” Clampet-Lundquist said. A lot of these issues stem from the lack of educational opportunities in prisons. During the mid-1990s, a lot of funding for education was stripped back. “Inside-Out: Dimensions of Freedom” enables these types of conversations to take place, while also encouraging education in prisons.

Despite this opportunity to come together with students on the inside, the course also has some drawbacks. “Hearing the door slam behind you, realizing that half of your class has to remain behind when you leave, has a subtle unconscious and sometimes conscious effect on students.” If this is the case, then why take the course?

A handful of Saint Joseph’s students who have participated in the “Inside-Out: Dimensions of Freedom” program have gone on to law school or the police force. They have said that by building relationships with people on the inside and treating people with dignity allowed them to change how they do their job. One Saint Joseph’s graduate who was in the class currently works at Homeboy Industries, a program in Los Angeles, CA which helps formerly gang-involved men and women. 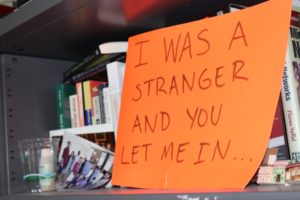 No matter your major, going outside of your comfort zone and putting yourself in a completely new situation allows you to think more about issues like inequality, survival, lack of education, and relationships. Maybe stepping outside of your comfort zone is a good thing. Maybe it will not only allow you to bring out the dignity in another human being, but bring out the dignity in yourself as well.

For more information on the Inside-Out Prison Exchange Program, visit their website.