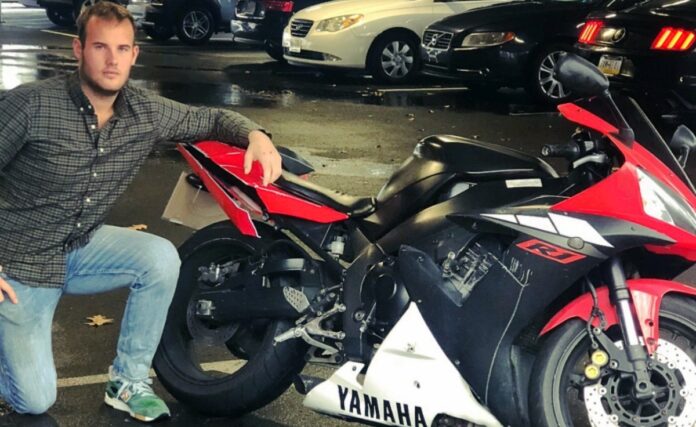 My name is Stephen Bosacco, a current senior at Saint Joseph’s University. About two years ago I was sitting in rashford hall bored out of my mind. Usually after I finish all of my work I browse shopping apps like Letgo and Ebay. It then came to mind that a motorcycle would be a cool new investment to use around campus. So I started to look for motorcycles over the next few months. Luckily at the time in 2018, I decided that buying a motorcycle; without a license, to drive on the dangerous city streets was not a good idea. Of course this decision resulted directly from parental resistance, but it was still made. I ended up buying two dirt bikes that year, which my dad had approved. One was a very crappy Chinese bike so I could learn how to ride. Then I bought a second bike which was a much more intense Honda motocross bike.

This bike was purchased as a project of mine. I took the entire motor apart and replaced just about everything on it from plastics and handlebars to brakes and rims. It was definitely a learning process and it took about a year for the restoration to be complete. Sadly I realized that there were very few places to ride dirt bikes in New Jersey so I ended up selling it. Jumping forward to 2019, it was my first year at an off campus apartment located in presidential city. I started thinking about buying a motorcycle again, this time without speaking to my parents. I bought a beginners motorcycle from a dealership about two miles away in Upper Darby. I wanted to get this motorcycle to ride to class in style while enjoying myself. So therefore I went out and bought it against all of the dangers I would encounter riding a street bike in Philadelphia.

Little did I know how dangerous and illegal it was to drive this bike to campus in bad weather and without a license. Realizing how stupid that was I trailered my bike to West Orange, NJ to take part in a three day motorcycle riders course so I could receive my license. It was a very fun trip and I ended up passing with flying colors, so I now have the endorsement to drive motorcycles on my driver’s license. It only took about a month before I was bored with the size of my street bike. So I sold it back to the dealer and bought a new one a few weeks later. The bike I bought was a Yamaha r1, a track bike that is just barely street legal. It had a lot of aftermarket bells and whistles that made it as obnoxious as humanly possible. I had this street bike for a month until I had a very bad accident. On the night of December 4th, 2019 I was coming home from night class in the rain and my bike had some major problems. This motorcycle was not high tech, there was no such thing as a check engine light. I took my helmet off nearing my apartment and suddenly the clutch cable snapped, it whiskey throttled out of control and landed on top of me. I was unconscious for ten minutes until two Saint Joe’s graduates luckily found me. I was pinned under the bike with the engine burning my body and my head beaten into the concrete. Eventually the two graduates were able to lift the bike off of me and I woke up, completely incoherent.

J: “Who should I call? Can you tell me your name, birthday, the year or who is currently the president?”

I was soon thrown into the back of an ambulance and spent basically a full night in the hospital. I, to this day cannot recall the ambulance ride or my time in the hospital. Since it was now December 5th and finals were starting in just under a week, something had to be done. My girlfriend called the student disabilities department and they helped us figure out a plan. The original plan was to take finals at a later date, after I was finished recovering at rehab. Rehab lasted for almost three months, I had continuing occupational and physical therapy sessions because my brain function was below average. It was a hard time for me, I gained weight since I was unable to work out and the stress of falling behind in school was becoming overwhelming. The students with disabilities department realized that it was far too late for me to take finals and urged all of my professors to issue me alternative assignments. The alternative assignments took me well into the first two weeks of the spring semester to complete. But in the end, I did not have to take any finals or look at any screen during my recovery. If I did not have the help of the students with disabilities department, I would have been forced to take a gap semester. This would have ruined my experience at Saint Joe’s and I probably would not have returned.

Did I learn a thing you may ask? …

Of course I learned a lot, but was I going to listen to logic or reason? …

I did not listen to a single logical brain cell, no way …

I lucked out with my street bike and the Harley Davidson insurance company ended up giving me twice the price I originally paid. What did I do with this extra funding? Well of course there is no better way to spend it then to reinvest in another motorcycle!

You may be wondering, so what happened with this one?

Honestly, nothing but fun.

I got to experience my first true off road riding trips with this bike. It was a beast and I’m glad I went from the fastest on the road to the fastest on the dirt. But this bike is a dual sport so in the spring, you guessed it, I was riding to class again. For the whole summer I rode to work on the street, putting myself into unnecessary danger. But I choose to remember the fun I had with this bike more than the potential consequences I could have had.

I recently sold that bike and went full circle. I used to only own a dirt bike for the dirt and that is exactly what I have now. I have realized that putting yourself in unnecessary danger all the time puts a lot of stress on your loved ones. My parents would always try and explain to me:

When this finally resonated and started circling my head, it became too much. Now I have something where if I get hurt, it is no ones fault but mine. There are no other vehicles to blame and no where to point fingers. It is also the best way to spend time with my father since he grew up riding on the dirt too.

I should have purchased this bike for off road use only from the start. But everything was a learning curve for me. Now I can pass my story on to my friends, my children, to their children and their friends, so they can save themselves the horrible experience. Ultimately, I thank God that I am alive and was able to share my experience with you.

Thank you for reading,

If you need any help or any advice/ thoughts related to motorcycles or recovery, please feel free to reach me via my email listed below: