Hawk cHill
Home People Returning to the Nest to Inspire 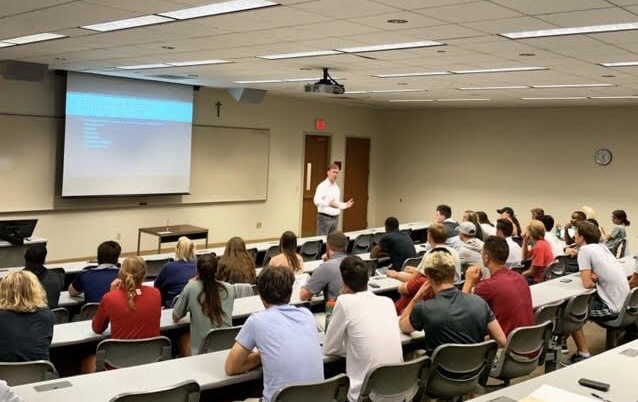 Goals, baskets, and touchdowns, are among many of the aspects that are celebrated in sports. Although fans see the more joyous and exciting parts of sports, there’s plenty more behind the scenes that are a part of an athlete’s success. Student-athletes here at Saint Joe’s pay particular attention to the role of leadership in their success in and outside of their sport.

Dan Gallagher is a leader on the court and in the office. Dan is a 1994 graduate of Saint Joseph’s University and former Hawk Mascot. In Dan’s career after graduation, he has been in many leadership roles ranging from Alumni Relations at SJU to VP of Client Experiences with Spectra. As of Sept. 2018, Dan has taken over a new title in the Comcast Corporation, Vice President of Talent Acceleration. From the very beginning starting with Dan’s time at Saint Joe’s, he has been exposed to the values of leadership which he has developed over the years to be the successful business executive he is today.

Soar is something that is heard often on the Saint Joe’s campus, mostly in the context of “Soaring Higher”. Now there is a new meaning of soar: the newly created SOAR Leadership Academy is a leadership-oriented program developed for Student-Athletes to further their knowledge and experience with leadership.

SOAR stands for Self-aware, Other focused, Accountability, Results-Oriented. The SOAR Leadership Academy is comprised of one sophomore, junior, and senior Student-Athlete from each team on campus nominated by their respective team coaches. SOAR members meet 4 times throughout the academic year.

A key aspect of SOAR’s success is Dan Gallagher’s contribution to the discussion around leadership. In the second year of SOAR Leadership Academy, the first meeting for this year took place on Sunday, Sept. 29th. SJU student-athletes welcomed Dan Gallagher to talk about leadership and self-awareness in different roles during their meeting. Dan’s discussion regarding leadership resonates with student-athletes across the campus.

When asking Dan Gallagher what he thinks is important in self-aware leadership we broke it down into the “Top points Dan has for student-athletes”.

Watch below to see what SJU Student-Athletes learned from their time spent with Dan Gallagher and what leadership looks like in their sport.