What is a meme? How was it started?

The Meme Culture — Definition of a Meme. Memes are an idea or message that is passed on from one person to another in society by means of speech, visual art, or propaganda. A meme that is of the internet is what is being analyzed by the term meme, and these stray slightly from their original context. Internet memes are visual works that have repeating animation or film, or sometimes are just still images, but the majority of them carry a text that is either ironic, satirical, or sarcastic. These internet memes are typically humorous, but sometimes made to convey a message of truth to the public. The main aspect of internet memes that set themselves apart is how they have the capability to spread so rapidly and gain serious traction in such a small amount of time. These memes that gain big attention fast are often referred to as “viral”. By that, it is saying that like a disease, the scale of the internet meme can reach vastly distant places and at an incredible speed.

How was Owen Wilson “Wow” started?

The origin of this meme is poking playful fun at the way in which actor Owen Wilson pronounces the word “wow” in combination with his abundant use of it in his filmography. There were compilations made of all the times he said wow and they last a few minutes, full of second long clips of him just starting wow with different tones and expressions. The humor in this picked up fast and gained traction with the internet meme community. Soon enough this meme had gone viral itself and people were even implementing it into spoofs and parodies of big hit cinema.

Has it been done before?

Social Media is one of the highest ways we as a society stay connected. Last week, a Facebook event was published in Melbourne, Australia and hundreds of people from all over in the area were invited to attend. The event consisted in them saying the famous word that Owen Wilson says in all of this movies – “wow” in unity to honor the actor and all of his films. There is no catch, nothing in return; it’s just people coming together doing something they think is interesting and fun. Event organizer, Nicolas Zoumboulis, wanted to gather people together to create positive energy. To remind people that we live in a beautiful world and embrace that like Owen does in his films. With his iconic phrase, people came together in unison to scream “wow”. A person told a local news radio, it was all for “the positivity of a simple wow” that “maybe even Owen Wilson himself might be able to hear.” Although, Owen Wilson himself does not attend these events, this movement is bringing people together and doing something that was organized over the internet. Now, the meme movement is spreading, and last time it was moving to London and Dublin. 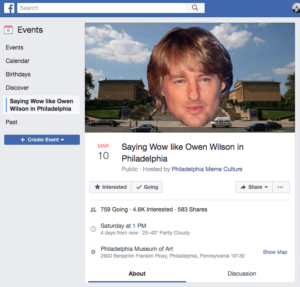 Why Philadelphia? In various other cities around the world, these gatherings had a great following behind them and the people involved joined in just because. They wanted to be a part of this event and build a sense of community, even if it was over something as trivial as saying wow. It’s not exclusive and anyone can join in on it. The Person who created the event for Philadelphia was different from the others in charge, but inspired by what occurred in the events prior. It wasn’t so much as though there was a reason behind conducting this event, but rather the idea of why not? I went to this event and was able to meet the man who set up this event. He was in his twenties, very enthusiastic about the movement, and he had a shirt with Owen Wilson and the word wow in red font. He carried around a megaphone and was just carrying out what those who held the events before him had… that was shouting wow and rallying the crowd around him to join in on the pop culture inspired fun. He embraced the crowd, keeping it light and getting everyone to have a fun time. He put this together for the experience and for the fun of it, but he also did something really great in addition. He promoted charity in selling wristbands that signified you visited the event. They were bright orange and had black inscription stating -”Wow” – Owen Wilson    Saying Wow In Philly- and these were handed out early on at the event. These wristbands were sold to promote but more so to raise money for The Leukemia & Lymphoma Society, handed out in the beginning of the “Wowing”. In the beginning there were roughly around fifty participants all there to shout wow with their fellow Philadelphians and meme admirers alike. As the time passed, the number quickly dwindled down to eight in a span of ten minutes. With all there to be done just saying wow, the reason as for the numbers decreasing so fast is no mystery, but even with this decline in numbers those who were running it and a few random supporters lagged behind to the flame alive. This lasted for about twenty to thirty minutes but even those who stayed eventually had to get a move on with their day. Although the event may have ended, the wristbands are available for sale still at 3 dollars per band and the proceeds will continue to go to charity, and the participants still carry the spirit of wowing in their hearts and on their wrists.
1 of 7