Although many people have preconceptions about what twins are really like, especially in the college settings, many of these are false! Here are three sets of twins to set you straight and tell you their stories about college, friends, and their every day social lives! 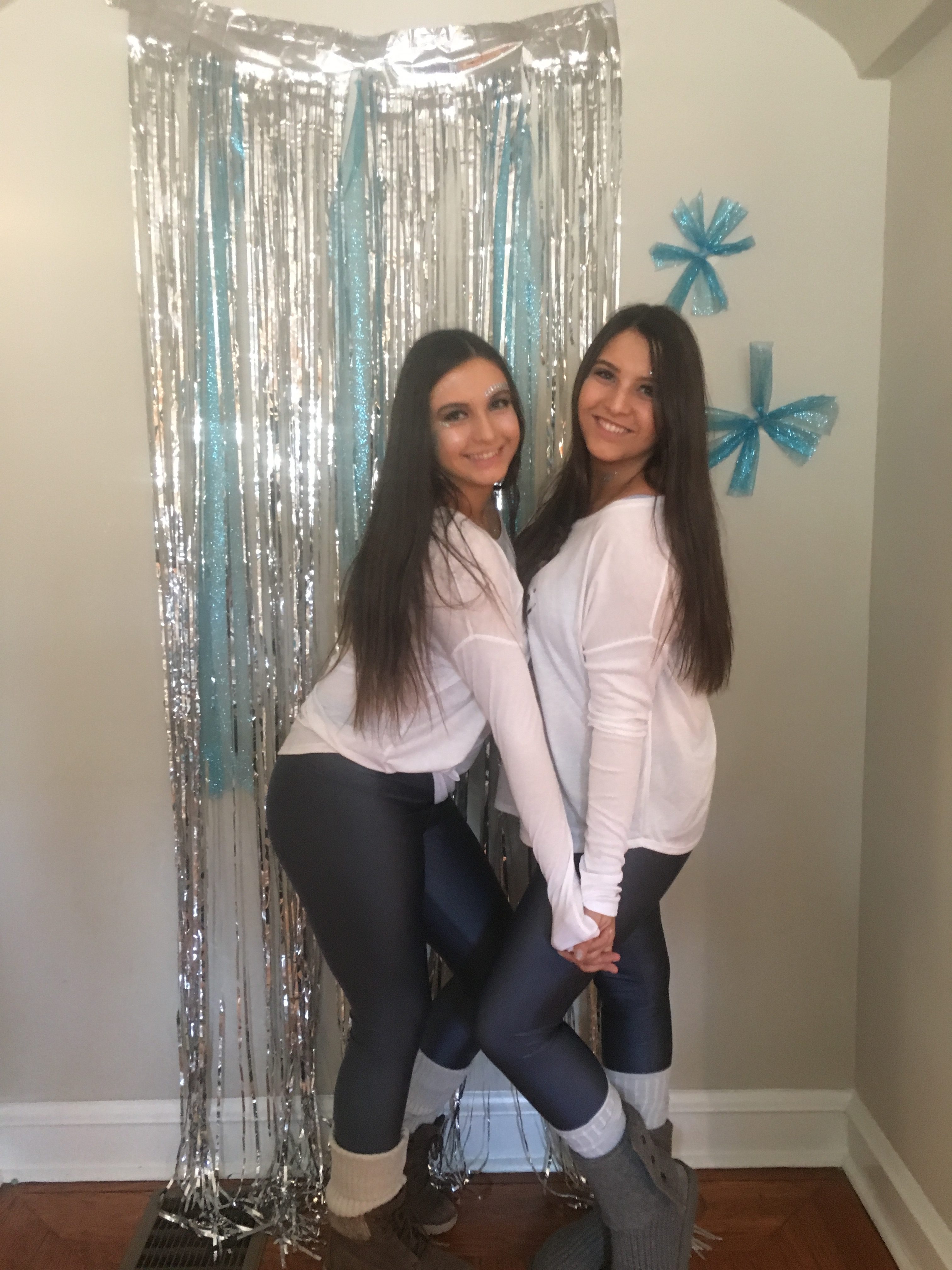 “We originally didn’t care!” The Centonza Twins answered enthusiastically. The conversations took off from there. I learned that the twins when entering their college search, both went in separate directions, looking at different school eventually overlapping with their interest in Saint Joseph’s University. They did however state that their parents said “it’s nice if you two go to same school,” “they feel more comfortable if we were together.” When I asked the girls about their schooling in the past they said that they had always been in the same schools. The parents and teachers felt it best for their development if they were in different classes. “We want to see if you can get other friends” is what the Centonza twins remember their parents and teacher saying to them at a young age.

After the twins explained that they were separated in their classes when younger, they remarked that the efforts of their parents and teachers to help them gain independent friendships didn’t work. “We made the same exact friends, we’ve always had the same exact 15 friends from home.” They did however admit that college has changed this aspect of their lives. They stated that because they are in different majors one has her “science” friends in her classes, the other has her “music” friends who she enjoys spending time with.

When the Centonza twins were younger their parents enrolled them in the same sports such as basketball, volleyball, and gymnastics. Liv stated that when they began in college “she (Daria) stayed with volleyball and I stayed with my music, she (Daria) never did music that’s where we are very different.” Beginning to laugh, they said that they can both play volleyball and both sing but one is better than the other at both so they chose one and it became their own.

When I asked the girls this question I was interested on what their responses would be. At school they try to take as many of their GEP’s together as they can because it gives them a sense of comfort and it’s “just easy.” I asked them about how they ended up in the same sorority as each other, and if it was by choice. Liv told me that they wanted to keep an open mind when choosing both starting off liking completely different sororities then ending up liking the same one when it came time to the final decision.

The girls were so fun to talk to and even gave me insight into a stereotype that they get a lot. They told me that they are often asked if they “wear the same outfits” or if they can “feel each other’s pain.” They stated that they find these questions so odd and always reply with a no and laughter. 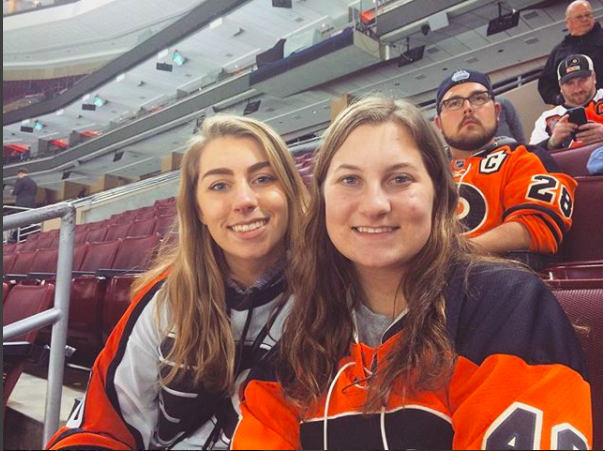 “There are a lot of times where we have an older sister/younger sister dynamic between us, and it functions in both directions”

The Rutt twins did not plan on attending the same college. Both Morgan and Lauren said that SJU was the only school they both applied to. “I originally wanted to go away to Connecticut or North PA”, said Morgan. Lauren noted, “We were both looking for very differing criteria in our potential schools”. The twins were reminded by their parents to think about the possibility of attending the same school.

Morgan had already committed to SJU weeks before Lauren decided. “I didn’t know Lauren was going here until the day of our senior prom”, Morgan said. In the end Lauren was stuck between SJU and Pitt, “so when it came down to deciding which school to go to my parents seemed to have more of a liking for SJU”, said Lauren.

Growing up the twins were involved in similar activities such as piano lessons and going to the same children’s gym, but this changed once they started to hit puberty. “We weren’t really into the same sports. I did cheer and she did softball”, Morgan said. Now, the twins are in the same sorority, Alpha Omicron Pi, but as Lauren says, “Our majors are somewhat similar, but other than that we have pretty different different lives both inside and outside of school”.

The Rutts grew up with a similar circle of friends, Lauren said, but later in high school their friend groups started to differ. “We both started to differentiate ourselves more from who we hung out with”, Lauren said.“I think it was probably senior year when we both went different ways. On campus we really don’t know each other’s friends other than as ‘my sister’s friend’”, Morgan adds.

4. Do you try to separate yourself from your twin or do you not mind if your lives overlap?

The twins both expressed contentment at their lives overlapping during college. Both twins admit that they live such different lives, so it can be hard to stay connected and to put in the effort to stay connected. Morgan notes, “I never mind when we do get together, especially since we’re pretty separated on campus. I think we both needed to have our own college experiences without one influencing the other too much”. Lauren adds, “We grew up being with each other nearly 24/7, so now we’re just adjusting to not being with each other all of the time”.

Both girls mentioned that their being twins does guarantee assumptions that they are inseparable. Morgan noted, “[People assume] we’re best friends” and Lauren said, “[People assume] that our sisterhood is different explicitly because we’re twins”. Morgan and Lauren are not always connected but that does not mean they don’t share a special bond. Lauren adds, “We do share a bond that is special beyond any relationship we have with anyone else, especially because I’ve spent more time together with her than anyone else.” 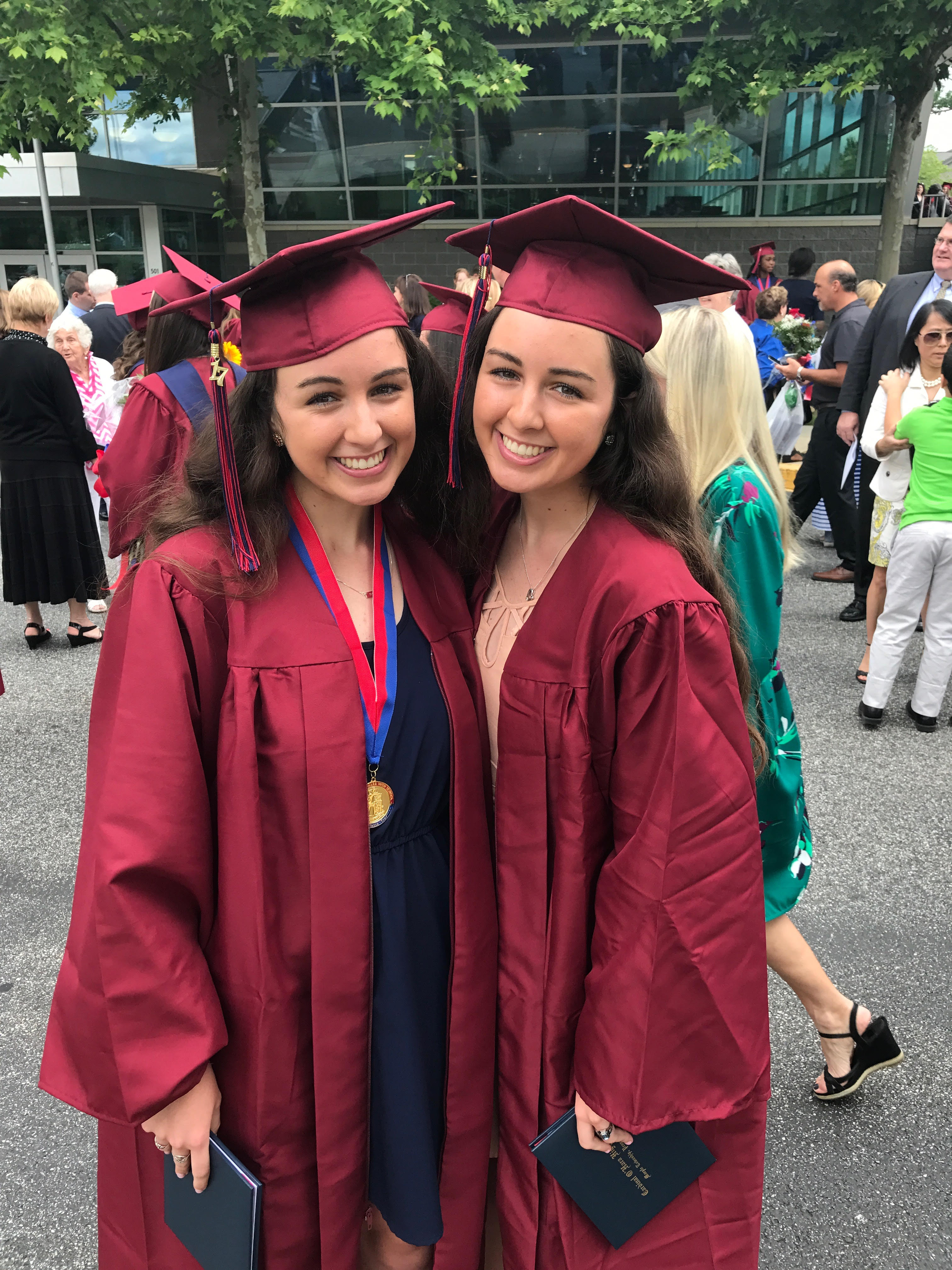 “We both work better when each other of us are out there supporting on the court.”

Kiki Daly responds, “Yes we did always plan to go to college together because we have been living together our whole lives and we thought it would of been weird if we lived separately for college. We share a room at home and now we share one at college.” After interviewing these girls, it shows how much of a bond that only those two will ever share. Kiki also says, “Our parents definitely wanted us to go to the same school because they know how close we are but they wouldn’t have been that upset if we went to different schools.”

Erin Daly says, “Yes we always did the same activities growing up. We always had the same group of friends because we have always had the same interests and we are roommates at home and here which made things super easy moving into college.” I learned how much respect the Daly sisters have for each other when they were being interviewed because they are around each other 24/7 and just completely love each other on and off the court and in and out of their room in Villiger Hall.

Erin added, “Yes we both play the same sport and we both work better when each of us are out there supporting one another on the court.”

Erin finally says, “We definitely do not mind if our lives overlap. We love to hangout, but we do try to differentiate ourselves and have our own little things that make each of us be our own individuals.” As much as these girls love each other, Erin makes it clear that they do try and be their own person and do their own things. She was very confident when she told me this.

Talking to the twins was such a pleasure. They gave me great detail and insight on what it is like to have a twin and a forever best friend. The bond that is shared between these girls is an amazing sight to see! The girls showed so much love and laughter just talking about one another and the relationship they have. People tend to think of the most absurd stereotypes, but one that the Daly sisters receive is “One stereotype we get a lot is the whole question of when we look at each other is it like we are looking in the mirror? That one is so funny because people that aren’t twins do not understand and probably never will. No it’s not the same, we might look a lot alike but we are two different humans.” The girls were passionate about this statement that was made because they get very intrigued by all the unnecessary questions they get.