Within every sports team, there is this sense of unity. It doesn’t matter what team you’re on, high school or collegiate, D1 or club, that feeling almost becomes addicting, and it is reflected on the field. For Thomas Malouf (‘22), someone who has continued his rugby career into college, this sense of unity is completely different and nothing like he has experienced in high school.

Transitioning from The Heights School rugby team in Bethesda, Maryland to the Saint Joseph’s University rugby team here in Philadelphia, everything’s different, but for the better. “Everyone takes it seriously, and it’s an established program with a growing number of participants” Malouf states. But it is not all seriousness on the team. “We hang out outside of practice like we would eat lunch together. Like if someone texts to see if anyone is in campion, people would go.” Malouf explains.

What makes this rugby team different from the others? “Positivity thrives; we encourage each other to do better and hold each other accountable but would help them be the best they can be” Malouf states. This sense of family on the rugby team is most certainly reflected in every game they play. 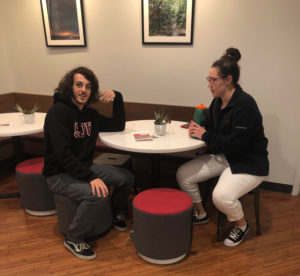 When I asked him how the team keeps the memory of Mark Dombroski, a student at SJU who passed away earlier this year, alive in and out of practice or in the game, he proceeds to roll up his sleeve to reveal a “MD 15” bracelet. “Everyone on the team wears it” he explains. Malouf then expands on how the team preserve his memory. “Everytime someone is down, we do a two thumbs up and a smile as a way to encourage them to keep going. Everything we do is in honor of him, and every game we do is for him.”  The Thumbs Up Cup earlier this month certainly reflected the idea of family on the field, something Malouf said was the best aspect of the team.

This rugby team exemplifies magis is the utmost way. On and off the field, they show what it means to be a SJU athlete. When asked if he would continue all four years, without hesitation, said “of course.” By displaying a sense of unity and camaraderie on the team, even people who stem from different rugby programs or who just started would want to remain. By exemplifying what it means to be a team in and out of practice, freshman like Thomas Malouf would notice how infectious it is.