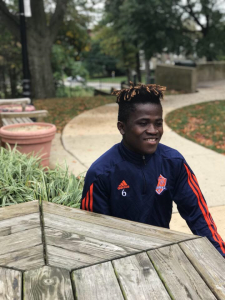 Have you ever thought about how international athletes find their way to Saint Josephs? Where did they come from? Why did they pick Philadelphia?

Well, we spoke to some people who know the recruitment process firsthand. Coach Don D’Ambra of the men’s soccer team described how he found some of his best players, who just so happened to be international recruits.

“A lot of internationals send emails out. There are companies that represent these kids. We are starting to develop relationships with companies in different countries. Everyone is starting to do it,” said D’Ambra.  “Guys are thinking, ‘What programs will get me to the pro level?’”

D’Ambra went on to say: “For SJU it is very difficult. We do have contacts in the pro level, but not nearly as much. It’s hard to get an American stud to a little school. Internationals don’t know the difference between Duke from SJU, all they want is an opportunity. Once their dream is broken of not going pro, the kids have nothing.”

Alvin Dahn, a freshman from Yekepa, Liberia, was able to give us his perspective on the process. Dahn was recruited to play soccer in America while he was in high school. His high school coach played soccer with Dahn’s brother and recruited him for school. He applied to get recruited within the states but SJU became his first choice because of how close it is to his brother. Want to find out more about Alvin Dahn and how he became a hawk? Watch the video below!