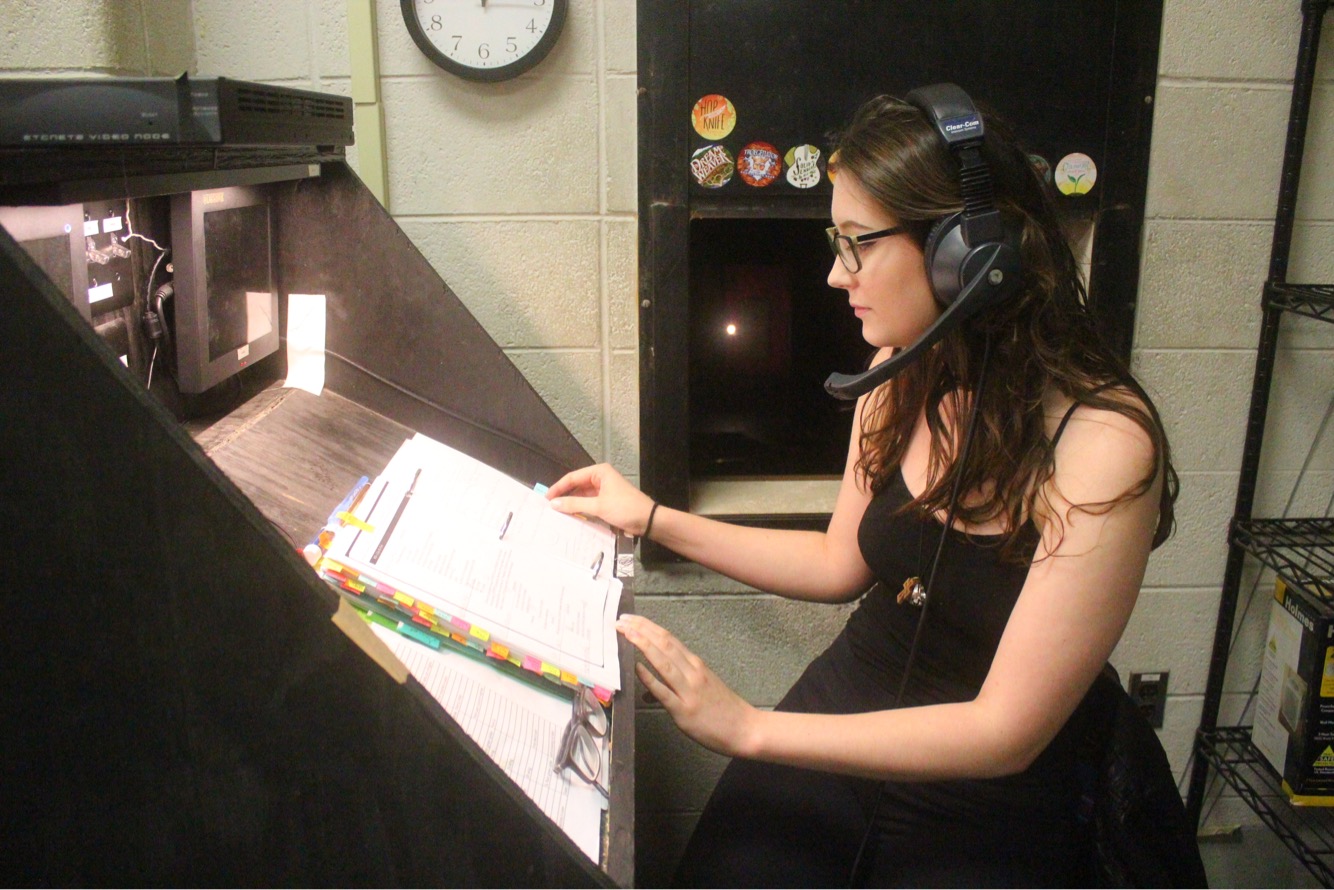 Meet Megan O’Donnell, a senior at Saint Joseph’s University and the stage manager for the university’s theatre company. Megan is set to graduate in December 2017 as a Theatre and Film Major.  We got a chance to interview her before she parts ways with SJU at the end of the semester. Here’s some questions we got to ask her as she prepared for the opening night of her last production at SJU, Sweeney Todd:

What are you studying at SJU?

When did you start stage managing?

“I started in high school. My mom picked me up late from school, so I needed something to kill time. So, I tried stage managing/crew and ended up loving it. Then, when I arrived at SJU, Renee, the Director of the Bluett Theatre, selected me to be a stage manager my sophomore year. Since then, I have continued down that path.”

What do you do as a stage manager?

“I call the show; I can show you my book. An example of what I do is I sit here and, through these headphones [picks up bulky black headset], I signal to people such as the light engineers to switch lighting when an actor begins to sing a song.”

What’s next for you after SJU?

“I would like to do production stage management professionally. I interned this summer at a theatre as a stage manager.”

*Side note: Megan is set to move to Boston and work in a professional theater this coming year!

Have you ever been in a musical?

“No, I started out in stage crew right off the bat. I have no desire to be on stage. I sing, but I sing in the shower [laughs]. That’s about it. I had to take two acting classes for my major and those were my least favorite classes that I had to take at SJU.”

How has it been managing your last production, Sweeney Todd?

“I’m lucky that this production was my last one because I feel like, if this was my first show, I would not have been able to do it. It would have been too stressful and hectic because we put together this production in crunch time.”

What’s the inside scoop and what can we expect from Sweeney Todd?

“It’s a great show! Sweeney Todd fits in perfectly with Halloween around the corner. The entire cast and crew worked hard on this production, so you’ll have to stop by at one of our shows to check it out.”

To see more of Megan and the Sweeney Todd cast, stop by Bluett Theatre on Oct. 28th at 8 pm and Oct. 29th at 2 pm to catch the remaining shows. You won’t find Megan on stage with the Demon Barber of Fleet Street.  Look up into the tech booth window at the rear of the house, though, and you will see the best stage manager of Hawk Hill, Megan, making her calls.