In 2019, Plus One was released changing the game for romance and comedy.  Starring Maya Erskine and Jack Quaid, this movie exceeds all expectations, providing an enlightening yet heartwarming experience filled with lots of laughs.

Longtime college friends Alice (Maya Erskine) and Ben (Jack Quaid) are approaching wedding season, an awful time for single people in their late twenties. After Alice goes through a rough heartbreak with her long term ex-boyfriend, she begins to dread going alone to all her upcoming weddings. Unlike Alice, Ben has been single for many years, as he is so fixated on finding “the one” through a meet cute. With this perfect idolized vision of his future girlfriend in his head it affects how picky he is with women. His parents divorced and had a horrible marriage, and the fact his father (Ed Begley Jr.) is about to marry a much younger woman (Perrey Reeves)  with young children, directly impacts his emotions and life. Opposites Ben and Alice then agree to make a pact to accompany each other to all their weddings within the next year. The movie then follows the ups and downs of this duo as they navigate adulthood, family changes, and finally, love.

Similar to any average romance movie, there is always a meet cute between the two characters that sets off the plot for the rest of the film. That average meet cute that demonstrates the chemistry between the two main characters does not happen in this movie, as the plot starts with them already knowing each other. The movie opens up at a wedding, with Alice emotional about her breakup. Ben, who is shown avoiding her, decides to not let his friend from college interfere with him flirting with all the single bridesmaids. From then on, it follows the complete opposite unspoken guidelines that any romantic comedy movie has. Instead of the classic beginning of relationship flirtation, mind games, and first dates, it follows the path of dysfunctional friends hanging out platonically until the spark reaches them halfway through the weddings.

Actress Maya Erskine provides a lot for this movie with her witty comments and nonchalant attitude. As you watch the movie, it is hard to not relate to Alice as she shows what everyone in their twenties are feeling; strong emotions about being an adult. The contrast between her and Jack Quaid, who is an average joe, sets the movie off with an already unusual relationship. To anyone who has seen a romantic comedy, you know the two characters will eventually cross paths. Written and directed by Jeff Chan and Andrew Rhymer, Plus One exceeds the normal romantic comedy movie. The witty banter between the two main characters adds charm and a whole different dimension to this movie. It is vibrant, light hearted, and definitely worth the watch. 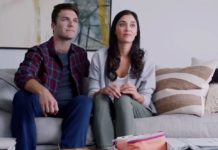 The Gang Gets Socially Correct