Does the name “Noah Centineo” mean anything to you?

Unless you’re a young woman between the ages of 12 and 19, odds are, it probably doesn’t. You may not even be aware of the significance it holds. The same applies to names like Jacob Elordi and Daniel Doheny. Mention these names to a group of young girls and witness their swoons and enthusiastic squeals.

So you’re probably wondering, who are these guys? And what role do they play for the younger generations?

These questions, and many like them, can be traced back to Netflix. In the past year, the popular streaming service released a number of romantic comedy movies. In almost every case, there seemed to be an attractive male lead whose stardom skyrocketed once the movie was released. They would often gain millions of Instagram and other social media followers overnight, as well as gain international levels of fame.

Take Noah Centineo for example. Centineo stars in To All the Boys I’ve Loved Before (2018), a popular Netflix original movie which premiered this past summer. After its release, there seemed to be only one topic of conversation: Centineo. 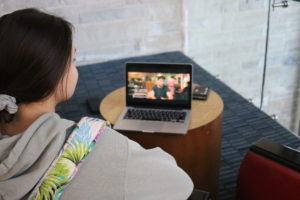 “After the movie came out, I really started to realize how much Noah Centineo blew up from just that movie,” said sophomore Carly Malestein.

“All my friends started following him on Instagram and he was just everywhere,” said sophomore Julia Scalfaro.

Even smaller movies like Alex Strangelove (2018) seemed to draw attention to Daniel Doheny, its male lead, as well. So why has this become such an trend? Why does it seem like these guys blow up overnight?

The answer is simple: Netflix.

Netflix’s recent releases target a young, hopelessly-romantic audience. Movies such as To All the Boys I’ve Loved Before (2018), Sierra Burgess Is a Loser (2018) and The Kissing Booth (2018) give a nostalgic nod to the cliche, yet beloved, teen movies of the 1990s and early 2000s.

These teen flicks also shine light on how Netflix has captured the charm of young adulthood, present in movies like Clueless (1996), Mean Girls (2004), and Superbad (2007), by creating their own, more modern version of teen movies and heartthrobs in a more accessible way.

“I definitely think they are cliche teenager rom-coms, but I still enjoy watching them,” said junior Josie Clark.