He is originally from West Chester, NY but recently moved to Stanford, CT. He found the move tough and prefers his original home in New York. When asked: “where are you from,” he will tell you New York.

Ryan is no stranger to change, his college path has been a wild ride. He began his freshman year at SJU, transferred to Iona College his sophomore year, then came back to SJU his junior year.

A difficulty Ryan has found with transferring twice is that although he was a Communications major at Iona, not all of his credits converted over. He has found himself repeating very similar versions of the beginner Communications courses he took at Iona like “Communications Theory.”

When not in school, Ryan works as a baker at Bruegger’s Bagels in Bryn Mawr. Contrary to his mother’s request for a simple job during college, Ryan took the unconventional route which calls for him to wake up at 4 a.m. to work. His shifts range from 5 a.m. to 12 p.m. or 5 a.m. to 2 p.m.

A struggle Ryan has found is that it can leave him with odd hours to do school work and little time to sustain a social life as he is always tired with a skewed sleep schedule from work.

Outside of school and work Ryan considers himself a Harry Potter fan, with a particular love for the character “Dobby.” 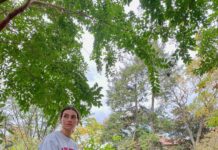