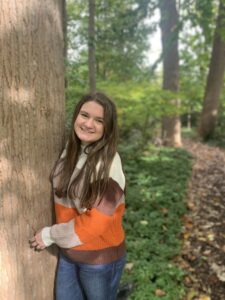 Keely Gallagher is a freshman Communication Studies major at Saint Joseph’s University. She is from Northeast Philadelphia, and attended Nazareth Academy High School. At the beginning of her junior year, Saint Joe’s wasn’t Keely’s first choice of colleges. It wasn’t even on her list. She didn’t want to major in Communications either. Everything she had planned for college was no longer an option after the Corona Virus shut everything down, and she couldn’t tour the colleges she wanted to.

Keely originally wanted to work in the medical field, more specifically nursing. She loved the idea of working in a hospital and helping people get better. But after taking the challenging AP Biology class, she realized Nursing might not be the right career path to pursue. She could barely comprehend the material. The content didn’t come naturally to Keely and she had to work so much harder than her classmates to maintain a passing grade. AP Biology wasn’t rewarding to Keely and she knew nursing wouldn’t be either.

With Communications it was different. Keely is such a creative person and loves writing, photography, and video making. She loved making something and calling it her own. Being able to put her name on something she had created was satisfying, and after finishing a project she felt rewarded and accomplished. Knowing she could major in something she loved doing so much, Keely finally landed on Communications as her major, and she loves it. It’s amazing to be doing something she loves as her major, and her future career.