With unlimited freedom and meal plans, some may say that gaining the “freshman fifteen” is inevitable. But why? How does a person gain weight in just a few short months away from home? According to WebMD, almost one in four freshman gain close to 5% of their body weight (or 10 pounds) during their first semester at college. Researchers have looked into why this weight gain is occurring and if it is solely based on diet or also has to do with other aspects of transitioning from high school home life to the hustle and bustle of universities.

Studies have shown that skipping the first meal of the day and throwing off your eating schedule messes up your circadian rhythm and puts you at a higher risk for increased weight gain.

The majority of college campuses have grown their food options. They tend to have all you can eat options instead of one single meal like one would have at home. At home, the meal is regulated and one option, rather than a choice overload, usually results in a person eating less quantity during their meals. A sophomore girl here at SJU said, “ Growing up my mom never really bought unhealthy food except for occasional ice cream or if we would bake, so having tons of unhealthy options at college made me go a little crazy.”

The sophomore girl, quoted above, before and after losing the freshman fifteen

Sometimes the culprit for excess weight gain isn’t necessarily your food intake, but rather the lack of physical activities. In high school, physical education (PE), was required and forced students to get their daily workouts in. However, without this built into our schedules, we sometimes just don’t have enough time in our day to fit in a workout at the gym.

With living in a new place comes new experiences and living standards. According to the Cleveland Clinic, big changes and stress can trigger weight gain in some people’s bodies. It depends on how your body handles living adjustments, but don’t be surprised if you put on a few pounds without even changing your eating habits and just from stress/environmental changes.

According to research from NYU, the easiest way to rack up the calories is through alcohol. Most people think drinks are drinks and don’t really add up, however having 5 beers at 145 calories each is close to 700 calories, which is ⅓ the recommended daily caloric intake. A freshman male said, “I gained about 20 pounds within a few weeks from drinking, snacking late at night, and going to Campion whenever I was bored.”

To beat the excess weight gain, here’s a helpful article for some helpful tips and a simple workout plan. 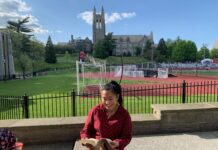 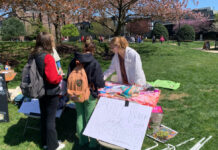 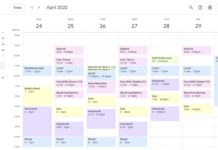 The True Horror Behind Hereditary

A Perspective For Those Out of the Loop: Thoughts on the...