“I’ve always wanted to play guitar, and one day I actually got one and then was actually playing.”

Josh Caggiano and his partner Mike Bachmann have achieved what many aspire to in the music industry. Sophomore business intelligence major, Josh Caggiano, along with his longtime friend, Mike Bachmann can say that they have made their dreams into reality.

Josh’s love for music started as a child. He began playing his first instrument, the flute, in third grade, and it just blossomed from there. One day, during his junior year of high school, he decided to put his dreams into action. He recalls a time when he and his friend Mike were coming home from marching band practice, talking about maybe playing together, “just for fun, after jazz band one tim 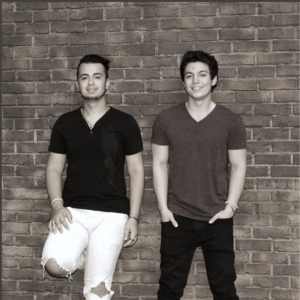 e, he was like ‘Just come over, we’ll see what we can do.’ No expectations” The first song they played together was “Give Me Novacaine” by Green Day. It was then that he realized his affinity for performing, side by side with another person.

From that, the formed their band, “Two for the Road”, a cover band that usually plays songs in the rock and roll/ alternative genre. Now, before every performance, they play “Give me Novacaine”, the first song they ever played with each other. Recently, they put out an EP. His favorite track from this EP is “My Creation” a song about creating yourself, with what society has in mind, but recognizing what’s still within you. This leads you to go through life, creating and believing in your own self.