Freshman orientation at Saint Joseph’s University is a once in a lifetime experience; seeing so many new faces, getting to know the place you will be living for the next school year, meeting new people who soon will become your closest friends, hanging out with your leaders…It’s hard not to feel excited and overwhelmed! But, have you ever thought about all of the hard work that goes into making orientation possible? Nicole Benson ‘24 is a leader on the orientation team for the class of 2026 session taking place in June, and she offers an inside look into what it means to be an orientation leader.

Benson is a rising third-year student at St. Joe’s. This will be her second year on the orientation team. She was also a leader last summer for the class of 2025 orientation session. When asked why she wanted to be a leader in the first place, Benson said, “Throughout high school, I was really involved with that kind of stuff, and I really wanted to do the same thing. I loved when I went through orientation, and just being able to connect with the group of freshmen. My leaders were awesome and it’s so fun, even though my experience was completely different.” Due to the COVID-19 pandemic, Benson was unable to have an in-person orientation; it was completely virtual… but this did not stop Benson from wanting to become a part of the team!

Benson describes a lot of the positive aspects and perks of being on the orientation team. “All of the leaders are so different and we have such an awesome dynamic,” Benson says. “It is unlike anything else I am involved in on campus.” The orientation experience is all about welcoming the incoming class of first-year students and showing them what it means to be part of the community here at St. Joe’s, and because of this, her absolute favorite part of the experience is preparing the new students for college and getting them excited to come to campus. “It’s just so much fun, seeing all the smiles on their faces,” she says. During a typical orientation session, incoming freshmen spend 2 days on campus and even get to experience what it is like to sleep in a dorm for a night! They get tours of the campus, which includes visits to academic buildings, classrooms, and freshman dorms.

There is also a lot of preparation that goes into making orientation possible. “We have weekly meetings and training sessions about different things. We’ll have ones about diversity, or Title IX, and other things we want to share with our freshmen about coming to campus,” she says. On the topic of the team as a whole, Nicole says, “There are team bonding activities to get close with the team and see who our potential orientation partners could be.” If you are interested in joining the orientation team or are an incoming first-year student who wants to know more about the class of 2026 orientation session, click here or visit @sju_orientation_2026 on Instagram! 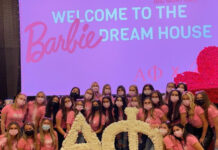