Saint Joseph’s junior, Lorenzo Edwards, is a forward from Chicago, Illinois. After a season-ending shoulder injury in 2016, Edwards was redshirted for the year and still holds another season of eligibility. His father, Kevin Edwards, played basketball at DePaul University and in the NBA for the Miami Heat, New Jersey Nets, Orlando Magic, and Vancouver Grizzlies. “I guess it just runs in the family,” said Edwards. Although his father remained in their hometown, Lorenzo fell for a whole new city. “I really enjoyed the classic feel and vibe of the school. I loved that they have the Big 5 and I can play against other top schools such as Temple, Villanova, La Salle, and Pennsylvania.” From the outside looking in, many people would assume Division 1 athletes live an endless party and celebrity-type lifestyle. For Edwards, that is definitely not the case. As a communication major and full-time basketball forward, he has little time for anything else.

It was tough I’m not gonna lie, it was really hard. When you redshirt you don’t travel with the team or practice so sometimes it feels like you aren’t on the team… The year that I did redshirt, I owe a lot to my teammates because they were really supportive, but it was a huge mental and physical obstacle… Even after that I still believe everything happens for a reason.

The person I trust the most would have to be my dad because he was in the NBA and has life experiences that I want to accomplish when I am older. Since he made it, I feel like I have no other option but to trust him because he has been through it. Also, he never forced me to play basketball, I actually even played baseball in high school. Once I made it known that I wanted to play basketball he helped train and coach me, so I owe a lot to him.

Honestly, the recruiting process was a lot. It was overwhelming to deal with having so many different schools talking to you at once and pretty much saying the same thing… It was hard to weave out who actually meant what they said and who didn’t. In the end, I just believed that coach Martelli really meant all he said.

The defining thing he said to me was that I would come into school as a boy and leave as a man.

The biggest challenge being a student-athlete is time management because free time and time to go out with friends is very limited. I signed up for it and knew what to expect so I can’t complain. 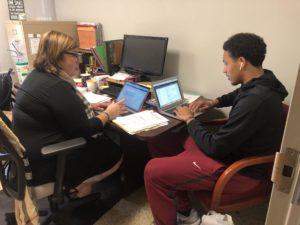 I want to play basketball as long as I can, but if that doesn’t work out I want to work as a sports agent so I can still be with athletes. I feel I can connect with athletes because I have been through similar life experiences.

Am I supposed to say communications *laughing*? To keep it real I don’t mind communications, I feel like it helps me out. I really do not like talking in front of people so I think the class benefits me in terms of that and there seems to be a lot you can do with the major.

My favorite basketball memory is when we beat Rhode Island on their court and on their senior night by 30 points… That was definitely the best. 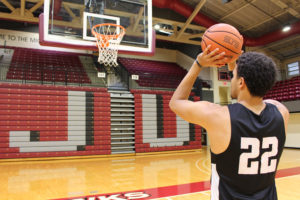